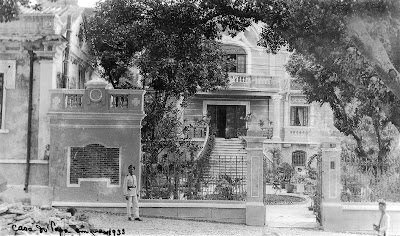 Casa de José Vicente Jorge, um ilustre macaense, no nº 20 da Rua da Penha
This photo shows the entrance to the main house. The 3 attached dwellings with separate entrances on the left, hidden by the wall were occupied by the families of his elder children. The main building where José Vicente and his younger children lived was like a museum where the largest collection of Chinese art and porcelain owned by a European was displayed. Many distinguished visitors came to see his collection and sign his guest book. Guests included Portuguese Poet and Writer Camillo de Almeida Pessanha, French Admiral Esteva, Lady Louis Mountbatten, the wife of the English Admiral Earl Louis Mountbatten, the uncle of Prince Philip, Duke of Edinburgh, and many others. The Sikh guard on the left was a private guard of the premises. Photo enhanced and contributed by Antonio Jorge da Silva.
Publicada por João Botas à(s) 18:29