Macao, the monte carlo of the far east

Chapter XIII
A prettier marine journey than from Canton to Macao, is not possible in the Orient, and it is of only eighty miles and accomplished by daylight with convenient hours of departure and arrival.
As on all passenger-carrying craft plying the great estuary having Hong Kong and Macao for its base and Canton its apex, you find the native passengers on your boat confined below the deck whereon the state-rooms and dining saloon of European travelers are located, and you perceive racks of Mausers and cutlasses at convenient points of this upper deck. To American eyes it is novel to see every stairway closed by a grated iron door, and a man armed with a carbine on your side of each of these barriers. You perceive on the main deck three or four hundred Chinamen of the coolie class, some playing card games, others Smoking metal pipes with diminutive bowls, but most of them slumbering in a variety of grotesque attitudes. None of these Mongols who observe your curiosity seems to hold any feeling of resentment for the effective separation of the races, which places him, the native of the land, in a position that might be called equivocal.
The English skipper and his Scotch engineer, who take the seats of honor when tiffin is served, respond willingly to your appeal for an explanation of the doors of bar-iron and the display of weapons—every first-class passenger always asks the question, and on every trip the British seafarers tell the story of Chinese piracy as practised up to comparatively recent times in the great estuary having a dozen or more names.
And an interesting tale it is, for it recounts deeds of the sea quite as audacious and high-handed as anything performed on land by Jesse James and his stage-coach bandits. Up to fifteen or eighteen years ago the estuary bristled with Chinese pirates, and wherever native fishermen and sailors foregathered, at Hong Kong, Canton or Macao, schemes for holding-up and sacking steamers carrying bullion and valuable merchandise were hatched with a frequency that gave a phase to local commerce that was anything but comforting, and more than one brave Yankee or British sailor went to his death fighting yellow thugs against overwhelming odds. The public decapitation of a handful of these murderers appeared to place no check on the outlawry. 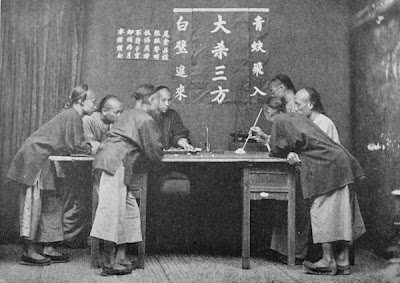 Once a Canton-bound steamer, carrying the mails and a considerable amount of specie, had her progress obstructed by two junks that wilfully forced her into shoal water. In the confusion that followed the grounding, a score of coolies, who up to that moment had been regarded as honest deck passengers, rushed to the pilot-house and engine-room and murdered every white man on board. Practically everything of value was then transferred to the junks, now conveniently alongside, and the spoil was landed at such points in the estuary that made official detection well-nigh impossible. This is but a sample of the stories you may hear while yellow-faced Chinamen are serving your food, and it must be confessed that it affords a sense of confidence to know that the grates of the stairways are actually locked, and that the rifles of the guards are loaded with ball ammunition. As he sips his black coffee at the termination of luncheon, the captain assures you that until within a few years a skipper was suspicious alike of every native deck passenger and every fishing junk indicating a disposition to claim more than its share of the channel; "but the old days in China," he concludes, "have disappeared forever, and piracy as an occupation has passed with them."
Getting back to the forepart of the ship, the views on land and sea are engrossingly interesting. On the shores of the mainland and on an occasional island are ancient forts which revive memories of interesting experiences of the white man's invasion of the Celestial kingdom, and the foreground of rice-fields is backed by interminable groves of mulberry-trees explaining China's preeminence as a silk producer. Numerous villages are passed, and from them the traveler obtains a fair idea of the rustic life of China. Now and again a pagoda is visible, crowning an elevation, and recalling childhood's school-book illustrations. You jump at the convenient conclusion that these structures of from six to ten stories had to do with the religion of the country, which surmise is erroneous, for the towers were reared to guard the geomantic properties of their respective neighborhoods, and in reality are relics of a bygone age of superstition.
The pioneer European settlement of the Far East—Macao—is at last in sight, and it presents immediately a visual contrast to Canton, by reason of its picturesque situation. There is something about the promontory that takes you back to Southern Europe, to the summer sea and the shores of the Mediterranean, perhaps to a brightly situated fishing port of the littoral of the Riviera. As the vessel rounds the cape and comes to anchor in the pretty crescent formed by the Praia Grande, flanked by terraced houses colored with minor tints of blue and yellow, you know instantly that this stranded Eastern rainbow is Monte Carlo—no, the Oriental equivalent of the beauty-spot of Latin Europe. 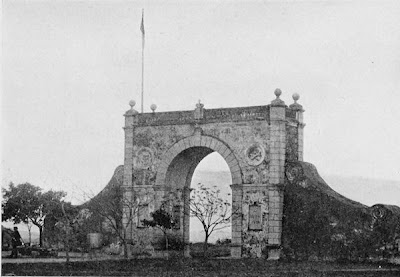 Macao is a little place large with history, in fact is an atom of Europe almost lost to public gaze by the vastness of Asia, and as much a part of the kingdom of Portugal as Lisbon itself. As the most enterprising maritime and trading nation of the sixteenth century, the Portuguese were the first to sail the Eastern seas, the first to open up commercial relations between Europe and the great empire of China, and holding the monopoly of all Oriental trade until the end of the eighteenth century. Owing to the prospect of increased gain, following on this European invasion, the waters of the Pearl River estuary soon became infested with pirates, which the Portuguese magnanimously assisted the Chinese government to subdue, and, in return, it is recorded, received in 1557 the cession of the rocky peninsula on which the Portuguese colony now stands. More than once Portugal had to maintain her rights by recourse to arms, but the colony has remained Portuguese without interruption for more than three hundred and fifty years, and is a hoary patriarch beside infantile British Hong Kong and German Tsing-tau. The oldest lighthouse on the coast of China is that of Guia, standing sentinel on the highest point of the Portuguese colony. 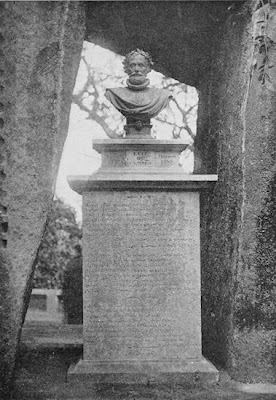 The colony has a population of perhaps eighty thousand persons, and practically all these are Chinese. There are, of course, a few score of civil and judicial functionaries springing from the mother-country; and, as in all places where Europeans have long lived in friendly association with Orientals, the Eurasian class is strikingly numerous. In no court on the Tagus are the laws of Portugal construed with more tenacity and precision than in Macao's chambers of justice; and the flag of Portugal floats over the homes of hundreds of loyal subjects who know only in a hazy manner where Portugal really is—they are rich Chinese and others evading the Chinese tax collector, or escaping burdensome laws, and for many years these crafty Mongols have made a sort of political Gretna Green of Macao. Certain influential Chinamen carrying on business in Canton or other southern communities live in almost regal splendor in Macao, and when the minions of the Chinese government attempt to hale them before a tribunal of law, or compel them to share the expense of carrying on the administration of a province, they exclaim in Chinese, "Oh, no; I'm a subject of the King of Portugal"—and prove it. The great sugar planter of the Hawaiian Islands, Ah Fong, whose Eurasian daughters were beautiful and accomplished enough to find splendid American and European husbands, was a subject of the Portuguese crown, strange to say. His domicile on the Praia Grande is one of Macao's proudest mansions.

The colony of Macao is scarcely more important than one of Anthony Hope's imaginary kingdoms, but for the fact that it is on the map, for the area of Portugal's foothold is not more than two or three miles in length, and a half-mile to a mile in width; it is merely the rocky promontory of the tip end of the island of Heung Shan. A wall of masonry with artistic gateway separates the dominion of Portugal from the great Chinese empire—on one side of the portal the law of the Emperor of China is absolute, and on the other the rule of the monarch of Portugal is sacred. In various ways the place and its people remind strongly of a comic-opera setting—but the officer there serving his far-away sovereign discourses with serious countenance of Goa, and Delagoa Bay and Macao as important colonial possessions. Until Hong Kong under the British began to rise as a port and base of commercial distribution, Macao had a considerable trade; but with the decline of business the harbor has silted up until now an oversea ship could not find anchorage. A few industries, like cement making and silk winding, are carried on in the outskirts of the colony, and a suspiciously large amount of prepared opium is shipped, although the closest observer can detect not a poppy under cultivation anywhere on the rocky promontory. 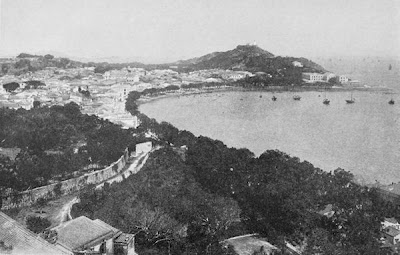 The old Protestant cemetery contains many graves of good men and true, such as naval officers and seamen, who have died on Eastern seas, and whose comrades preferred to leave them interred in Christian soil rather than intrust their cherished remains to cemeteries in pagan lands. The headstones of Macao's God's-acre bear name after name once carried with pride on the rolls of the American, British or French naval and merchantman services, and diplomatic and consular titles are recorded on more than one headstone. It is interesting to scale the steps to inspect closely the façade of the Jesuit church of San Paulo, erected some three hundred years ago. Nothing remains but the towering façade, as erect as if reared yesterday, and bearing silent testimony to the courage of the pioneers in the Far East of the Catholic faith. A 'rickshaw journey through every important street, from the center where are the hotel and government buildings to the remotest patches of farming land near the "frontier," consumes scarcely two hours. In the public park you come not infrequently upon statues with tablets informing all observers of the importance and majesty of the home country welded to the peninsula of Europe, once famed for the intrepidity of its navigators and adventurers. If Macao move the visitor to voice an opinion, it is that under certain conditions which you might name the place could be a veritable paradise, but that benevolent Portugal is there conducting an earthly Nirvana for all and sundry of China's affluent sons mustering the ingenuity and influence to gain shelter beneath the flag of dear old Portugal.

Macao's claim to renown rests chiefly upon the fact that Portugal's greatest bard, Camoens, there wrote in part or its entirety the immortal "Lusiad," which in epic form details the prowess of the sons of ancient Lusitania in Eastern discovery and oversea feats of daring, and in which work the voyages and discoveries of Vasco da Gama are recorded with the fidelity of a history prepared by a sympathetic admirer. As scholars know, the "Lusiad" was first published in 1572, is in ten cantos and 1102 stanzas, and is translated into most modern languages. Important American and English libraries possess it by at least four translators, each being more or less a standard. (...)
Excertos (e imagens) do capítulo dedicado a Macau do livro "East of Suez Ceylon, India , China and Japan", escrito por Frederic Courtland Penfield e editado nos EUA em 1907.
Publicada por João Botas à(s) 19:59