Two Years in China: Narrative of the Chinese Expedition 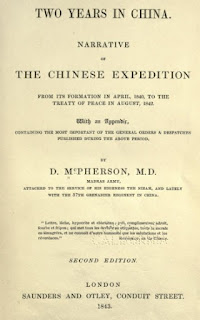 "Two years in China: narrative of the Chinese expedition, from its formation in April 1840, till April 1842; with an appendix, containing the most important of the general orders & despatches published during the above period" é um livro da autoria de Duncan McPherson MD (médico). Edição Saunders and Otley, 1842 .
O livro aborda o período de Abril de 1840 a Agosto de 1842, relativo à 1ª Guerra do Ópio (1839-1842) que terminou com a assinatura de um tratado de paz, o Tratado de Nanqing (Nanjing), a 29 de Agosto de 1842, entre as autoridades britânicas e o imperador chinês.
Duncan testemunhou os acontecimentos destes anos enquanto cirurgião integrado na "37th Madras Native Infantry", um dos vários regimentos de infantaria que sob comando de oficiais britânicos e constituído por soldados indianos defendia da presença dos britânicos na Índia e os interesses da Companhia Britânica da Índia Oriental que praticamente controlava o comércio entre a Ásia e o Ocidente.
Excerto do cap. 6 relativo a Macau:
This city as has already been remarked is built on the peninsula of an island called by the Chinese Gowman. The extreme breadth of the Portuguese settlement is about three quarters of a mile and its length three miles. The chief beauty of the town consists in a long line of well built houses on the beach with a broad walk in front called the Pria Grande. On the heights above the town forts are built which certainly have the appearance of strength from without but a glance into the interior which the Portuguese are not fond of granting will at once convince the most superficial observer that they would soon yield even to a small nine pounder battery.
True there are large guns in their forts but like those of the Chinese they have vent holes large enough to allow the thumb to enter and their gun carriages would certainly tumble to pieces in the first fire. The British merchants are the sole prop and support of the town independent of the maney circulated by them two thirds of the revenue is derived from a tax levied upon their goods and property. The Chinese authorities exercise supreme sway over the city. In a few hours they have the power of stopping all supplies not a house can be built nay even a door cannot be made to communicate between one house and another without first obtaining the permission of the resident mandarin to do so Robberies and assaults are of common occurrence in the city but no redress can be obtained the Portuguese hand the party over to the Chinese authorities who in return refer them to the Portuguese.
The majority of the Portuguese inhabitants are the most miserable looking beings possible. From constant intermarriages with the Chinese it is with difficulty that the natives of the two separate countries can be distinguished and with the exception of the governor and his staff there is not one family with whom the English associate.
There are about three hundred soldiers in the town all of whom originally came from Goa and other Portuguese settlements in India. They are respectful and well dressed The pay their officers receive appears miserably small in our estimation though they themselves live very comfortably on it. An ensign receives eight dollars a lieutenant ten and a captain twenty dollars a month besides perquisites. The greatest attraction in Macao is Mr Beale's aviary where the noble bird of paradise is seen This bird has been in Mr Beale's possession for upwards of twenty years Another place worth visiting is Camoens Cave It is situated in the centre of a large garden and is formed by several immense piles of granite rocks thrown as if casually together a large hollow space being left in the centre It was here that Camoens composed the Lusiades An inscription over his tomb denotes that he was born in 1524 and died in 1579.
Publicada por João Botas à(s) 03:05 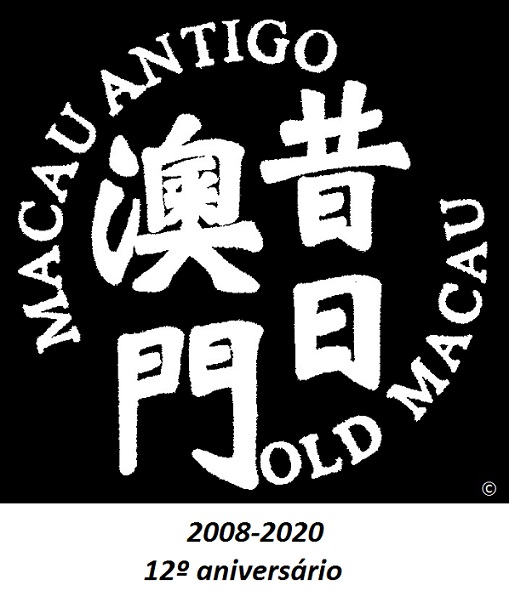