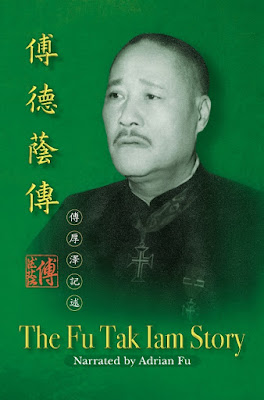 Adrian Fu published a biography of his grandfather, Fu Tak Iam, whose company held the gambling franchise in Macao between 1937 and 1961, and who laid the foundation for his family’s business empire today.
The story of Fu Tak Iam’s rise from rags to riches is the stuff of Hollywood films. Born in 1895 to a poor farming family in a village in Nanhai county, Foshan in Guangdong province, Fu had little formal schooling. He was eight years old when drought forced his father to leave the village for Hong Kong where he worked in a metal shop. Fu himself began working at an early age, first collecting and selling firewood to help support his family.
He made the journey to Hong Kong in 1908, just 14 years old, to help his father in the shop. Three years later, he took a job as a stoker in the boiler room of a British vessel, working a route between Hong Kong, Macao, Guangzhou, and ports in the Pearl River Delta.He often spent his spare time wandering the streets and gambling when he could. One day, Fu was gambling in Central (Hong Kong) and got arrested after getting into a fight.
Sentenced to 10 months in prison, Fu made best use of the time in jail and learned much about gambling from the other inmates.
After leaving prison, Fu moved to cities in Guangdong and Guangxi and went into business: opium, gambling and firearms, all profitable sectors. He returned to Hong Kong flush with cash from his many ventures. While horse racing was the only legal form of gambling there, local governments in China turned a blind eye.
Fu met Huo Zhi-ting, president of the Guangdong Bank and founder of the Hong Nin Savings Bank of Hong Kong, in the early 1930s. Despite Fu losing out on his bid for the gambling franchise in Macao to Huo’s consortium, the two became friends. Huo admired Fu’s management of gambling and agreed to fund a large casino in Shenzhen aimed at punters from Hong Kong. Huo had the support of Chen Jitang, a warlord powerful in Guangdong.
There Fu built the largest casino in China, involving an investment of 10 million yuan. It attracted many gamblers from Hong Kong, just as intended, and badly affected the casinos of Macao. But in 1937, after Japan launched its all-out war on China, the Nationalist government banned gambling on the mainland. The Shenzhen casino was forced to close, resulting in heavy losses for its investors.
Fu returned to Macao just in time to make a second attempt at the franchise in the city. He partnered with Kou Ho-neng, who had made a fortune from a chain of pawnshops, to form the Tai Heng company. Their bid of 1.8 million patacas a year won in 1937; they promised three casinos, the largest in the newly renamed Hotel Central in downtown Macao.
Tai Heng would hold the gambling monopoly for the next 24 years. Their bid turned out to be an excellent investment, especially during World War II, when Macao was the only city in East Asia not under Japanese military occupation.
Thousands of wealthy people from Hong Kong, the mainland, and overseas took refuge there to escape the war. Japanese business people, officials, and military officers were also frequent visitors to the Hotel Central , patronising its bars and restaurants and the other casinos. There was little alternative entertainment. Fu used the profits to invest in passenger ships, the Number 16 pier, and trading.
Despite being one of the wealthiest men in Macao, Fu did not fear for his safety and usually had only one bodyguard. On 10 February 1948, he went into the Kun Iam Temple, leaving his driver outside. A group of armed men burst in and kidnapped him. They demanded a ransom of nine million Hong Kong dollars. The family turned to Ho Yin, a highly influential Chinese and colleague of Fu’s, to mediate negotiations for his release. With his help, the two sides agreed to a much-reduced ransom of 900,000 Hong Kong dollars, but when one of Fu’s children brought in the police, the deal fell apart.
Enraged, the kidnappers cut off the top of Fu’s right ear and sent it to his family as a warning. They also reverted to their original ransom demand, prompting the family to reach out to another mediator: the famous Cantonese opera star, Tang Wing Cheung. He got the ransom back down to 900,000 Hong Kong dollars; the family paid and Fu was released. Police eventually arrested a renegade Kuomintang soldier believed to be the ringleader; he was sentenced to 18 years in prison. After World War II, Fu diversified his investments in Hong Kong, moving into property, shipping, construction, cinemas, and trading. He decided that the next generation should not follow him in the casino business.
Fu was a workaholic, with little time for his four wives and 15 children, and little interest in socialising. He spoke little; his main method of communication was letters, which he wrote each week, to his children and employees, mostly with instructions on what to do.
Those in Macao interested in learning more about Fu Tak Iam can visit his former home, located at 28-34 Avenida da Republica and owned by the Fu Tak Yung Foundation, and read two marble tablets about his life housed in two pavilions on the property. Or they might pop over to the pavilion in Chong San Memorial Park on Guia Hill to read the tablet there. For those looking to dive deeper into the biography of the gambling mogul, they can read the The Fu Tak Iam Story (踧德蔭頦), published by his namesake Foundation.
Excertos de um artigo de Mark O' Neill publicado na Macao Magazine, Jan. 2019