As the day when China and Portugal start negotiation on the settlement of the Macao issue draws near, the future of the island on China's southern coast is commanding much attention worldwide. In this article, Beijing Review offers a brief account of Macao's background and its current situation. About 40 miles from Hong Kong, Macao is situated to the south of the city of Zhuhai and on the western banks of the Zhujiang estuary. Macao consists of the Macao Peninsula and Taipa and Coloane islands, encompassing an area of 16.4 square kilometres. The area of Macao proper is 5.7 square kilometres, that of Taipa 4.1 square kilometres and Coloane, 6.6 square kilometres.
In 1535 (the 14th year of the reign of Emperor Jia Jing of the Ming Dynasty), the Portuguese bribed the local officials in Guangdong and secured the right to anchor and trade at Macao Harbour. In 1553 they asked to dry their loads in Macao under the pretext that their ship hit a rock and their cargo was drenched. They used this opportunity to set up residence in the area. After the first Opium War (1840-42), the Portuguese took advantage of the defeat of the Qing Dynasty to take control of Macao. The Portuguese seized Taipa in 1851 and Coloane in 1864 and placed them under their jurisdiction. They have occupied and administered Macao ever since.

'One Country, Two Systems'
Since the founding of the People's Republic, the Chinese government has declared on many occasions that Macao is Chinese territory and the Macao issue, which is a legacy of history between China and Portugal, should be solved peacefully through negotiation at an appropriate time. Since 1974, when Portugal overthrew its fascist dictatorship in the April 25th Revolution, relations between China and Portugal have gradually normalized. When China established diplomatic relations with Portugal in 1979, the two governments reached an understanding in principle on the Macao issue. In May 1985, Portuguese President Ramalho Eanes visited China, the first Portuguese head of government to do so. During his stay in Beijing, leaders of the two countries discussed the Macao issue, and reviewed the satisfactory cooperation of the two governments in handling the issue. In a subsequent joint press communique, the two sides said they would hold negotiations in the near future to settle the Macao issue through diplomatic channels.
Accordingly, the Chinese and Portuguese governments will soon begin to negotiate on this issue. The basic policy of the Chinese government towards its settlement is: According to the concept of "one country, two systems," the Macao issue will be settled through peaceful negotiation, in much the same way as the Hong Kong issue, so as to restore Macao to Chinese sovereignty while maintaining its stability and development.
Because the Chinese government will give full consideration to Macao's history and present situation, and because it has adopted a fair and reasonable policy towards the settlement of the problem, there is every reason to believe that through friendly consultation between China and Portugal the Macao issue will be solved to the satisfaction of all the parties concerned. Macao's stability will remain, and its economy will continue to develop. With the settlement of the Macao issue, a new chapter will be opened in the relations between China and Portugal. 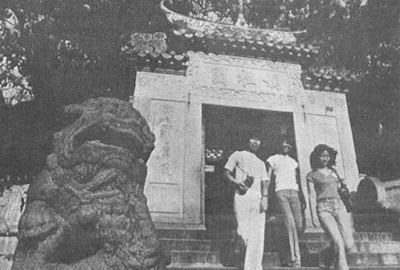 Economy and Limits
Macao has a subtropical climate, with an averge annual temperature of 22.3 degrees Celsius and an annual precipitation of 1,970 mm. The rainy season lasts from May to September, and between May and November Macao is frequently attacked by typhoons, on the average more than 10 times a year.
According to a local census, the area has a population of 408,500. Other estimates have put the population at 450,000. Chinese people make up 97 percent of Macao's population, the rest are Portuguese (totalling around 1,000) and "Macanese," descendants of the original Portuguese settlers and local Chinese who inter-married. Macao's population density is quite high, averaging nearly 30,000 people per square kilometre.
Portuguese is Macao's official language, and all its laws, decrees and documents are written in Portuguese, a language understood mostly by those from Portugal or inhabitants of the Portuguese descent. Chinese is still widely used and English the main medium for communications between Macao and Hong Kong and the international community.
In the 1950s, Macao was a consumer city with only traditional crafts making such things as matches, firecrakers and joss sticks. The mainstay of Macao's economy was gambling, giving the island the name "Monte Carlo of the East." In the 1960s, with an influx of capital from Hong Kong, Macao's economy started to develop. The woollen yarn and clothing industries have progressed. Since the 1970s, the economy has been enjoying a robust growth, bringing in its wake a change in the industrial setup. The woollen yarn industry, the import-export trade, the building industry, tourism and finance have greatly expanded so that the importance of gambling business has gradually declined. Exports of manufactured goods, tourism and the building industry have become the three pillars of Macao's economy. In 1984 trade, tourism and the building industry accounted for 36.9 percent, 25 percent and 8.7 percent of Macao's gross national product respectively. In 1985 the growth rate of its economy was 3-4 percent, and its total output value was about 8.2 billion patacas (7.9 patacas is equivalent to US$1). Its per capita output value was then 20,000 patacas. (If the population is taken at 410,000, the average per-capita output value was US$2,500).
Because Macao has a limited market, 70 percent of its products are for export. At present Macao has trade ties with more than 90 countries and regions and has signed preferential trade agreements with the GATT, MEA and the United Nations Conference on Trade and Development (UNCTAD). Macao's products are exported to members of the European Economic Community (EEC), the United States, Japan, Hong Kong and the Chinese mainland. In 1985, Macao's import and export volume totalled 13,407 billion patacas, of which exports accounted for 7.18 billion patacas (about US$900 million) and imports 6.1 billion patacas.
There is almost no agriculture in Macao. Fruit, vegetables and other foodstuffs are supplied from the mainland. Fishing also plays an insignificant role.
Although Macao has achieved some progress in recent years, its foundation is rather weak and its prosperity still depends heavily on the rest of the world. Macao lacks natural resources, and industrial materials are nearly all imported. Fresh water and electricity are provided by the mainland. Macao has no deepwater harbours and no airport. Its import and export trade must, therefore, be routed through Hong Kong. Its export markets are also concentrated, and the fluctuations of the markets in the EEC, the United States and Japan have a large impact on Macao's economy, Macao's industries are also mainly labour-intensive, putting it well behind Hong Kong in the development of technology-intensive industries. These unfavourable conditions have severely circumscribed Macao's economic development. The settlement of the Macao issue will be conducive to the maintenance of Macao's stability and to the promotion of its economic progress.
Yu Huan in Beijing Review nº21 May 26, 1986
Publicada por João Botas à(s) 09:19