Chapel in the Great Temple of Macao 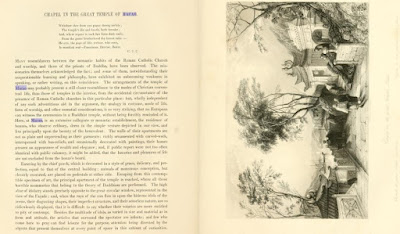 Withdraw thee from yon pagan throng awhile;
The temple's din and bustle, both forsake;
And, where repose in each fair form doth smile,
From the gaunt brotherhood thy lesson take:
He errs, the page of life, recluse, who cons,
In monkish zeal Franciscan, Dervise, Bonze. 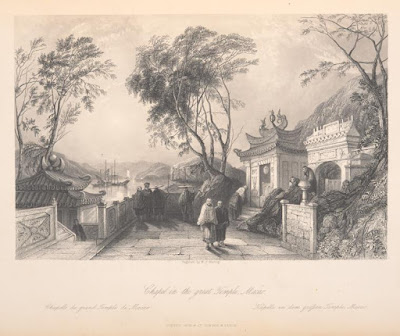 Many resemblances between the monastic habits of the Roman Catholic Church and worship, and those of the priests of Buddha, have been observed. The missionaries themselves acknowledged the fact; and some of them, notwithstanding their unquestionable learning and philosophy, have exhibited an unbecoming weakness in speaking, or rather writing, on this coincidence. The arrangements of the temple of Macao may probably present a still closer resemblance to the modes of Christian conven- tual life, than those of temples in the interior, from the accidental circumstance of the presence of Roman Catholic churches in this particular place : but, wholly independent of any such adventitious aid in the argument, the analogy in costume, mode of life, form of worship, and other essential considerations, is so very striking, that no European can witness the ceremonies in a Buddhist temple, without being forcibly reminded of it. Here, at Macao, is an extensive collegiate or monastic establishment, the residence of bonzes, who observe celibacy, dress in the simple vesture depicted in our view, and live principally upon the bounty of the benevolent.
The walls of their apartments are not as plain and unpretending as their garments: richly ornamented with carved-work, interspersed with basreliefs, and occasionally decorated with paintings, their homes present an appearance of wealth and elegance; and, if public report were not too often identical with public calumny, it might be added, that the luxuries and pleasures of life are not excluded from the bonze's board. Entering by the chief porch, which is decorated in a style of grace, delicacy, and perfection, equal to that of the central building; animals of monstrous conception, but cleverly executed, are placed on pedestals at either side. Escaping from this contemptible specimen of art, the principal apartment of the temple is reached, where all those horrible mummeries that belong to the theory of Buddhism are performed. The high altar of idolatry stands precisely opposite to the great circular window, represented in the view of the Facade; and, when the rays of the sun flow in upon the hideous idols of the scene, their disgusting shapes, their imperfect structure, and their senseless nature, are so ridiculously displayed, that it is difficult to say whether their votaries are more entitled to pity or contempt. Besides the multitude of idols, as varied in size and material as in form and attitude, the articles that surround the spectator are infinite; and few who come here to pray can find leisure for the purpose, attention being diverted by the objects that present themselves at every point of space in this cabinet of curiosities.
The walls are decorated like those of our military armories, with halberds, swords, matchlocks, drums, tom-toms, and other ensigns of power, or conquest, or submission; lanterns of different patterns, and sizes, and colours, are suspended from the roof, besides festoons or garlands of many-coloured ribands, united by metal clasps. Bonzes are continually in attendance upon the worshippers; and one of their duties, a duty however in which they have a direct pecuniary interest, is that of selling little slips of red paper, inscribed with moral maxims, or forms of prayer, or the objects of some petition which the votary desires to present to his tutelar god. This traffic is constant and profitable, and yields a handsome revenue to the college.
On the high altar, tapers of sandal-wood are always burning; to these the supplicant approaches, lights his red paper, then laying it, at the feet of his favourite idol, accompanies its combustion with suitable entreaties for assistance or protection. A door, generally standing open, and around which a number of idle bonzes are collected, discloses a long corridor leading to the banqueting hall and cells; strangers, however, are but jealously admitted even to peep within these precincts. At the opposite side of the temple from that by which the visiter enters, a staircase leads down to a second esplanade, more limited in extent, but equally pleasing in all its accompaniments. In the semicircular area before the chief facade, a broad paved terrace, close to the margin of the waves, is enclosed by a stone parapet, profusely- sculptured, and on which are graven moral maxims and sentences, extracted from the Book of Fate, or other foolish fictions. Amidst the rocks that rise abruptly, and with a peculiarly picturesque effect, above the water, a small chapel is intruded, containing an image of Buddha, over which a large paper lantern is suspended. Beside this tiny temple, is a second building, with a porcelain roof, something of an Italian cornice and decoration, but having a spacious circular opening in front, that occupies the principal part of the whole elevation.
On a rock immediately opposite the window, stands a pedestal, with a recipient vessel, for the offerings of the humane and zealous amongst the visiters. Whether the expectation associated with the little hexagonal pedestal may extend its influence to any portion of the faithful, it is difficult to decide ; but certainly the number that visit this secluded and romantic part of the temple is considerably smaller than is constantly to he seen in the principal cella of the building. This fact is the more remarkable, because the scenery around the little chapel is highly picturesque, and of that mixed and contrasted character that pleases particularly in China. The terrace has been gained from the sea, the site of the temple from the ledge of rock, and the intermixture of the beauties of nature with the works of art is as close and complete as a Chinese artist could desire. Yet hour succeeds to hour, in this sequestered spot, and neither the tread of a footstep, nor the sound of a voice, falls on the ear of the miserable bonze, who sits within view of the place of tribute, and presents a taper to the devotee to light his dedicatory red paper at, which he comes to offer in the adjoining chapel.