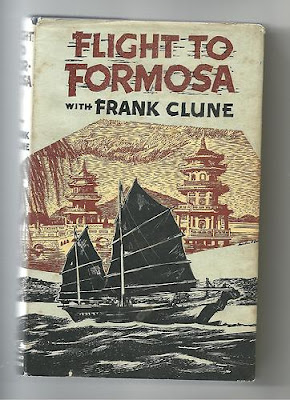 De Frank Clune (1893-1971) editado pela primeira vez em 1958. Inclui, entre outras, fotos de Macau e as suas impressões da estadia de cinco semanas na Formosa tendo entrevistado Chiang Kai-Shek e a sua mulher, bem como outros elementos do governo nacionalista que tinham saído da China aquando da subida ao poder do partido comunista em 1949.
In his five week visit to Formosa, Clune interviewed President Chiang Kai-shek, Madame Chiang and leaders of the Nationalist Government. In this book we can find information on the progress that has been made under democratic government on Formosa since the exodus of the Nationalists from the mainland of China in 1949.
Born and educated in Sydney, got his first job, selling newspapers, at the age of 7. At 15 he left home and for the next five years led an adventurous life on sea and land in Australia, France, Belgium, the USA and Canada. He returned to Australia in 1913, enlisted in the AIF in 1915 and was wounded at Gallipoli; invalided home, he resumed a vagabond's existence and was in turn a fireman, recruiting sergeant, concert balladist, steward, vaudevillian and mousetrap salesman before settling into the practice of accountancy after his marriage in 1923. A decade later, while convalescing from an ulcer attack, he wrote an account of his earlier wanderings. Published as Try Anything Once (1933), the book launched Clune on a writing career that produced over sixty books 1934-71. During much of this period, when he was one of Australia's best-selling authors, he had the services of P.R. Stephensen as collaborator; Stephensen is acknowledged as co-author of The Viking of Van Diemen's Land (1954) and The Pirates of the Brig 'Cyprus' (1962), and as 'literary collaborator' in other volumes (e.g. in the preface to Wild Colonial Boys, 1948). On the evidence, Clune provided the travel diaries, historical research and other raw material for his books, which were mostly written by Stephensen, especially in the 1940s and 1950s.
Klune regularly catalogued his works under several headings: autobiography (Try Anything Once; Pacific Parade, 1945; Try Nothing Twice, 1946; Korean Diary, 1955); biography (some dozen titles including studies of varying length on the bushrangers 'Captain Melville', 'Captain Starlight' and Martin Cash; the adventurers Edward Hammond Hargraves, 'Bully' Hayes, Jorgen Jorgenson, 'Chinese' Morrison and Louis de Rougemont; and the mass murderer Deeming); history (a similar number of titles including Wild Colonial Boys; Bound for Botany Bay, 1964; The Norfolk Island Story, 1967; and The Scottish Martyrs (1969); exploration (notably Dig, 1937, a narrative of the Burke and Wills expedition); historical novels (Dark Outlaw, 1945, a study of the bushranger Frank Gardiner, reprinted as Gunman Gardiner, 1951, and King of the Road, 1967; and Ben Hall the Bushranger, 1947); adventure (e.g. The Red Heart, 1944); and travel (more than two dozen volumes including Rolling down the Lachlan, 1935; Roaming Round the Darling, 1936; Prowling Through Papua, 1942; Tobruk to Turkey, 1943; High-ho to London, 1948; Somewhere in New Guinea, 1951; Roaming Round Europe, 1954; Flight to Formosa, 1958; Journey to Kosciusko, 1964; Journey to Pitcairn, 1966).
Publicada por João Botas à(s) 18:58