Because some readers of this blog asked me to write something in english about Macau's history in the early days, for this post I choose some excerpts from Descrição da Cidade do Nome de Deos da China included in the book entitled Livro das Plantas de todas as Fortalezas, Cidades e Povoações do Estado da India Oriental... by António Bocarro in 1635. This book has also attached a relevant plan of Macau made by by Pedro Barreto de Resende. (image bellow).
Note: This is a free translation from the ancient portuguese (17th century). It's very interesting the description of Macau fortresse's by that time. Hope you like it! 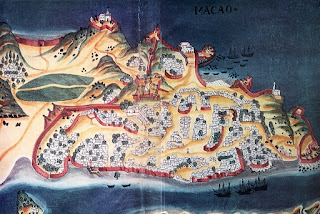