Harriet Low (1809-1877) was a young American woman from Salem, Massachusetts who lived in Macau from 1829 to 1833 as companion to her aunt. Her uncle, William Low, was a trader in Canton (Guangzhou) and this necessitated his being away from Macau for long periods of time. While there Harriet wrote a journal and letters to pass the time, detailing her life in Macau for the benefit of her sister back home. Her journal was first transcribed by her daughter Katherine Hilliard in 1900, quoted extensively in Elma Loines' book on the Low family in 1953, followed by a two-volume set by Nan Hodges and Arthur Hummel in 2002. With her portrait painted by George Chinnery, the most famous artist on the China coast, her fame has endured for over almost two centuries. 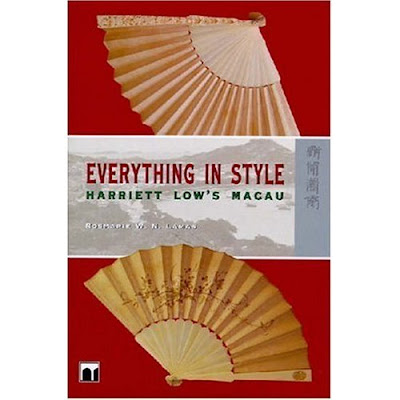 Now yet another book based on Harriet's journals has been published, written and compiled by Rosemary Wank-Nolasco Lamas, a social anthropologist and one-time Macau resident. Having read Loines's and then Hodges's books and waded through Harriet's, at times, monotonous accounts of the comings and goings of Macau society, I eventually lost interest as the young girl seemed frivolous with no great insights. I turned with relief to the letters by Rebecca Kinsman, wife of another China trader in Macau, written just ten years later, to which Lamas never refers. Thankfully, however, this latest book does hold the reader's interest, and gains strength from the fact that Lamas selectively takes entries from the journal: "The information contained in the journal had to be presented in a different way, because reading the unabridged version may [and does] prove somewhat tedious. There are obviously many repetitions of situations that occur over the years, which invariably provoke similar reactions….. I tried to extract in context her more original ideas or points of view and offer a more accessible version of the journal, without being superficial." In this, Lamas certainly succeeds.
The book is organized by theme beginning with Harriet's journey from America and her arrival in Macau in 1829. Each chapter starts with Lamas introducing the topic with a paragraph or two setting the scene and putting the journal extracts into context. This follows with a description of the city as it was then, and is today, with Lamas taking an honest look at earlier Portuguese government and present day Macau. The author then tackles the power of religion in Macau, a staunchly Catholic place, with Harriet a Unitarian and unable to come to terms with the Catholic faith, and the Anglican attitude as expressed in her disapproval of socialising after church on Sundays.A long section covers the life of foreign women in Macau and the way they spent their days, writing letters and a diary, reading, learning another language -- in Harriet's case, Spanish -- walking, horse-riding, and sewing their clothes, since "the washman beats them to pieces dreadfully." Socialising, with frequent dinners, parties and balls, played a big part of life in such a small community with its attendant pleasures and often gossip and ill will. Entertainment took the form of musical evenings, games, amateur and occasionally professional dramatics, and opera performances. Though at times prudish and intolerant of others' beliefs, Harriet's engaging sense of humour shows her to be keenly interested in her surroundings. Most of the chapter on Macau, China and the China Trade is given over to background history with fewer quotes from Harriet's journal except when she secretly visits Canton, interesting though this undoubtedly is. Despite all Lamas's careful research, it is surprising that she makes a basic mistake by confusing the island of Shamian with the actual site of the factories which were built just outside the city walls, further east along the waterfront of the Pearl River. Shamian was not developed until 30 years after Harriet had left Macau. When the factories burned down in 1856 during the Second China War, the western traders relocated to warehouses across the river on Honam until the British succeeded in claiming the site of a sandbar (Shamian) where boat people had previously anchored, and it was developed to become a European enclave. It is still European in style and a Heritage site today. The site where the factories stood is now Wenhua Park, and Thirteen Hong Street, onto which the factories backed and which Lamas mentions, is now named Shishanhang Road. The book ends with Harriet departure from Macau in late 1833, accompanying her aunt and seriously ill uncle who died on the way back to the US. Lamas then briefly covers the remainder of Harriet's life, her husband and eight children, and stay in London, taken from letters at the time.Since she was a first hand observer of an important period in East West trade, Harriet Low's journals have been the mainstay of much research on the China trade. Everything in Style is full of interesting details and is certainly the best on her life so far.
Texto de Valery Garrett, indo assim de encontro a alguns pedidos que me fizeram chegar solicitando post's em inglês.
Publicada por João Botas à(s) 23:04