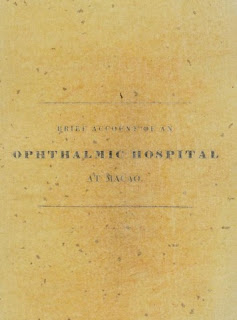 
Thomas Richardson Colledge (1797-1879) was an English surgeon with the East India Company at Guangzhou (Canton) who served part-time as the first medical missionary in China, and played a role in establishing the Canton Hospital. In 1837 he founded and served as the first president of the Medical Missionary Society of China.
Excertos do livro:

"During a residence of nearly thirty six years in China I have mingled with the best foreign society both in Macao and Canton which circumstance has enabled me to become acquainted with many acts of humanity exercised by distinguished individuals towards objects worthy of commiseration It was however reserved for me to witness at this advanced period of my life the beneficial effects arising from an Ophthalmic Institution. Though not sufficiently versed in the idiom of the language in which I write to express myself fully with regard to what I conceive to be the merits of this praiseworthy undertaking yet I cannot refrain from expressing my own individual satisfaction at the good which has resulted from it hoping that at a future time some other person possessing more extensive knowledge of the subject and of the English language may render full justice to its unparalleled utility and importance As records and memoranda relative to the establishment are in the possession of its founder (...)
But to return to the account of the ophthalmic Its founder TR Colledge Esq was appointed surgeon to the British Factory in China in 1826 and the succeeding year commenced administering to the infirmities of such indigent natives as sought his assistance All sorts of distempers now came under his investigation But soon discovering that no native practitioner could treat diseases of the eyes which prevail to so great an extent among the laboring classes of Chinese he determined to devote his skill more particularly to this branch of his profession In the year 1828 he rented apartments at Macao for the reception of such patients as required operations for the recovery (...)
Sugestão de leitura: