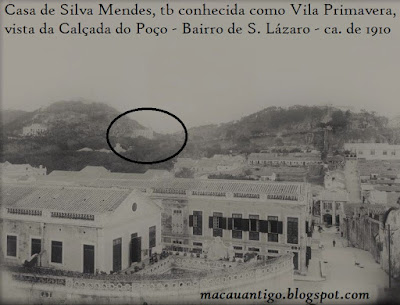 Dr. Alfredo Pinto Lello, Colonial Secretary to the Government of Macao, was born in 1864 at Fontes, in the district of Villa Real, Portugal. From 1890 to 1892 he was Colonial Secretary of the province of Mozambique, and Acting-Governor of the District of Lorenzo Marques. He was transferred to Macao in 1893.

Count de Senna Fernandes, the Consul for Siam, in Macao, is a native of the Portuguese Settlement. Born in 1867 he received an excellent education at St. George's College, Weybridge, Surrey, and, at the age of twenty, returned to the place of his birth with the most pleasant memories of his stay in England, and well equipped for the responsibilities of later life. Besides having the supervision of certain commercial interests, he became the intermediary between the Chinese and Portuguese Governments. In recognition of his public services he has been made a Commander of the Legion de Conception, and decorated with the Order of the Crown of Siam.

Mr. A. P. de Miranda Guedes, Director of Public Works and Superintendent of the Fire Brigade, was born at Poiares, near Regoa, in the district of Villa Real, Portugal, in 1875. He obtained honours at the University of Coimbra and at the Army School in Lisbon. As a civil and mining engineer he served in several Portuguese colonies, including West Africa, and has been Chief of the Railway section of St. Thomé, Chief of the Survey of the Railway of Malange, and Director of Land Surveys in Angola. He received his present appointment in 1906.

Mr. Pedro Nolasco da Silva has taken part in a number of progressive educational movements, and has been responsible for initiating several important municipal improvements. He was born at Macao, on May 6, 1842. During his academic course at the Seminary of St. Joseph he won the first prize in Philosophy, and, on the completion of his studies, was appointed Student Interpreter in the Government Chinese Translation Department, of which, subsequently, he rose to be the head. When, later, the department became an independent government office he was responsible for its total re-organisation. In 1887 Mr. Nolasco da Silva was appointed Secretary Interpreter to the Portuguese Minister Plenipotentiary to Peking, Conde de Souza Roza, at present Ambassador in Paris, whose special mission to the Chinese capital resulted in the Portuguese-Chinese Treaty of December 1st of that year, in which China, for the first time, recognised the sovereignty of Portugal over Macao. Always interested in educational matters Mr. Nolasco da Silva has been a teacher of Chinese in the Seminary of St. Joseph, and in the Commercial Institute. He has translated and compiled several school-books, among which is the "Manual da Lingua Sinica para uso dos Joveus Macaenses." He founded the "Associacao Promotora da Instruccao dos Macaenses" (the association for the promotion of the education of Macaenses), which now maintains the English Commercial School conducted by Mr. R. A. Coates, a graduate of Dublin University, and he organised the two central schools of primary instruction for boys and girls respectively. It was due also, to his initiative, that that splendid charitable institution, the Santa Casa da Misericordia, was revived, and, by his organisation of the great "Santa Casa" lottery, placed on a sound financial basis. For several years he was the provedor, or president, of this far-reaching philanthropic enterprise, and his term of office was marked by the erection of the Orphans' Asylum, the introduction of the service for the relief of the poor, and the framing of the present regulations. Mr. Nolasco da Silva's participation in municipal affairs has been no less noteworthy. During his occupancy of the positions of vice-president and president of the Municipal Council or the "Leal Senado" as it is termed locally, a number of important reforms were carried out. The new market and some fine commodious buildings were erected on the site of the old São Domingo market and in the Largo do Senado, where, formerly, only insanitary little houses existed. In other parts of the town several resumptions of insanitary property were also carried out, and the lighting of the public streets by electricity was due almost solely to his efforts. For a time Mr. Nolasco da Silva was editor of the Echo do Povo, a Portuguese weekly paper published in Hongkong, and he was also the principal contributor to the weekly papers, O Macaense and the Echo Macaense, published at Macao. He is a member of the Conselho Inspector da Instruccao Publica, and has been several times a member of the Conselho de Provincia. About twenty-five years ago, in recognition of his many services, he was created by the Portuguese Government Cavalleiro da ordem de Nosso Senhor Jesus Christo.

Mr. Francisco Xavier Pereira (imagem à dta.) has the distinction of being the youngest president of the Leal Senado ever appointed. He was elected to the position in 1907, and his term of office will not expire until 1909. Born at Macao in 1883, he was educated at the Macao Lyceum and at Coimbra University. After being admitted as a barrister, he returned to Macao, in 1905, to practise law.

Mr. A. J. Basto, who has been elected many times as president of the Leal Senado, has practised as a lawyer in Macao for thirty-eight years. Born in Macao in 1848, he travelled a great deal during his younger days, visiting Shanghai many times, India, Portugal, France, Spain, Italy, England, and different parts of Africa. He is a Commander of the Portuguese Order of Christ, the Order of the Pope, the Rising Sun of Japan, the Crown of Siam, and the Redemption of the Republic of Liberia; a Chevalier of the Legion d'Honneur, and a Knight of various other orders. Mr. Basto is also a Fellow of the Royal Geographical Society of England, a member of the Royal Geographical Society of Lisbon, and of other scientific societies of Europe, and was the secretary of a Diplomatic Mission from Portugal to Japan and Bangkok. 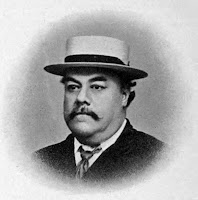 Dr. Lourenço Pereira Marques (imagem ao lado), son of the late Commander Lourenço Marques, was born in Macao, in the famous garden of Camoens, which belonged to his family. Educated at the Royal College of St. José, Macao, and at Lisbon and Dublin, he is a Fellow of the Royal Academy of Medicine in Ireland, a member of the Royal College of Physicians of Ireland, and a Fellow of the Royal Geographical Society of Lisbon. He is the author of essays on various subjects, and has written several articles descriptive of his travels. He is a Commander of the Portuguese Military Order of Christ, and a Knight of the Ancient and Most Noble Order of the Tower and Sword, the latter decoration being awarded him in recognition of assistance rendered during the plague epidemics. Dr. Marques frequently gives poor patients the benefit of his medical experience without payment. He has a large circle of friends, and is a highly esteemed member of the local community.

Mr. Luiz Augusto Lopes Remedios, the Postmaster-General of Macao, was born in the Colony in 1874, and was educated at Macao and Singapore. At the age of nineteen he joined the China Trades' Insurance Company, but returned to Macao in 1900, and received his present appointment two years later.

Mr. A. H. Wilzer, the Commissioner of Customs for the Lappa district, which encircles Macao, was born at Hamburg in 1866 and educated there. He came to China in 1887 for the Customs service, and was stationed, first at Swatow, and afterwards at Peking and Canton. In 1899, following immediately upon his return from a holiday trip to Europe, he was appointed to Shasi on the Yangtsze, and, one year later, to Peking. On his way north, he was delayed at Tientsin by the Boxer troubles, and, returning to Shanghai, held an appointment there until 1901. He was then retransferred to the capital, where he remained till the end of 1904.

Mr. M. da Silva Mendes, who has been practising as a lawyer and advocate in Macao since 1902, was born in 1870 at Santo Thyrso. He had a very successful career at Coimbra University, and now, in addition to his professional duties, he is Professor of German at the Institute of Macao. He devotes a considerable portion of his spare time to literary work, and his publications include "O Socialismo Libertario on Anarchismo," and "Guilherme Tell."
Nota: Ao contrário do que é mencionado Manuel da Silva Mendes nasceu em 1867 e chegou a Macau em 1901.
Publicada por João Botas à(s) 09:46