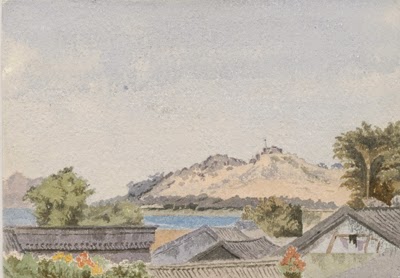 Inscribed in pencil verso, "Macau sketched Dec 1898". Major Jeffries, F.V. was a Royal Engineer and an amateur artist. His wife was an accomplished botanical artist. They were living in Hong Kong 1898 - 1900. He painted a series of watercours while he was based in Hong Kong and the New Territories. He was with the 4th Balloon Section of the Royal Engineers.
Publicada por João Botas à(s) 09:54