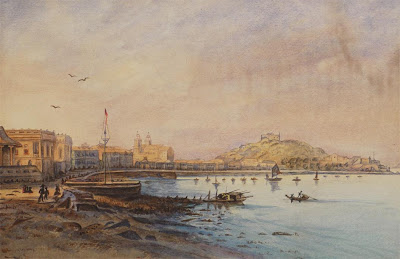 Watercolour of Macao harbour and Avenida de Praia Grande created by the German artist Eduard Hildebrandt during his travel around the world in 1862-64. Hildebrandt usually made several sketches and studies of his views which he later reworked into a final version in oil. He created an almost identical oil painting: "View of Praya Grande, Macau 1863" (now in the Hong Kong Museum of Art), and almost identical chromolithograph was included into the series of his works: "Aquarelle. Auf seiner Reise um die Erde" (Berlin, 1871-4).
Eduard Hildebrandt was a German painter. He studied in Berlin and Paris and was a friend of scientist and explorer Alexander von Humboldt. Under the latter's influence he took a voyage around the world in 1862-64, making watercolour views of many places he visited. "Fantasies in red, yellow and opal, sunset, sunrise and moonshine, distances of hundreds of miles like those of the Andes and the Himalaya, narrow streets in the bazaars of Cairo or Suez, panoramas as seen from mast-heads, wide cities like Bombay or Pekin, narrow strips of desert with measure-less expanses of sky all alike display his quality of bravura" (Wikipedia)
Publicada por João Botas à(s) 10:19