Excerto do livro The Land of the Boxers (1903) do capitão Gordon Casserly que ficou hospedado no hotel Boa Vista. 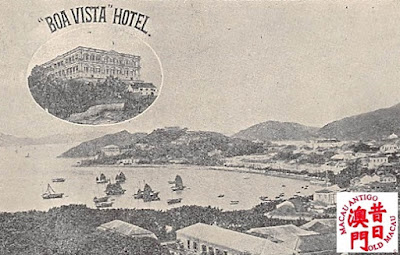 (...) Seated in a ricksha, pulled and pushed by two coolies up steep streets, I was finally deposited at the door of the Boa Vista Hotel. This excellent hostelry—which the French endeavoured to secure for a naval hospital, and which has since been purchased by the Portuguese Government—was picturesquely situated on a low hill overlooking the town. The ground on one side fell sharply down to thfe sea which lapped the rugged rocks and sandy beach two or three hundred feet below. On the other, from the foot of the hill, a pretty bay with a tree-shaded esplanade—called the Praia Grande —stretched away to a high cape about a mile distant. The bay was bordered by a line of houses, prominent among which was the Governor's Palace.
Behind them the city, built on rising ground, rose in terraces. The buildings were all of the Southern European type, with tiled roofs, Venetian-shuttered windows, and walls painted pink, white, blue, or yellow. Away in the heart of the town the gaunt, shattered fagade of a ruined church stood on a slight eminence. Here and there small hills crowned with the crumbling walls of ancient forts rose up around the city.
Eager for a closer acquaintance with Macao, I drove out that afternoon in a ricksha. I was
whirled first along the Praia Grande, which runs around the curving bay below the hotel. On the right-hand side lay a strongly built sea-wall. On the tree-shaded promenade between it and the roadway groups of the inhabitants of the city were enjoying the cool evening breeze. (...)
Publicada por João Botas à(s) 09:56