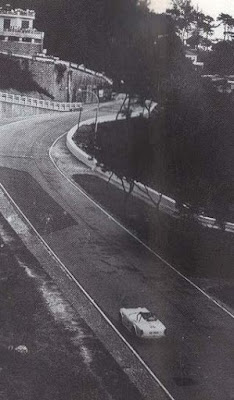 Ron Hardwick cringes when asked about the whereabouts of the Jaguar XKSS that he drove to victory in the 1959 Macau Grand Prix.


'I don't know where it is, I wish I still had that car,' said Hardwick shaking his head.
'Before the race it was forecast by so-called race experts that the Jaguar was too big, too clumsy, too everything for Macau but it did alright. I bought it from K. F. Chang before the '59 race for $18,000 and I sold it for $20,000 figuring there was no way that it could win at Macau again but it did.
'It was a good car and it would be worth a fortune today. It was one of only 13 XKSS' made by Jaguar before a fire at the factory destroyed the entire line. I tell you though, the Jaguar wouldn't have won in the '60 race if I had been allowed to enter my Cooper Climax.
'That car had a 1.5 litre engine, the same as they were using on the Formula One circuit in Europe and the organisers of Macau knew it would have given me an advantage so they disallowed it.' Listening to Hardwick reminisce about the early days of the Macau GP rattling off names of such characters as Teddy Yip, Albert Poon, Grant Wolfkill and George Baker, he said the event has drastically moved away from the original concept set-up by race founder Paul Dutoit.
'It used to be a race for locals and people in the region but now it's gone far beyond that - it's all professionals now. Macau then was something that all the drivers used to look forward to as a time to see friends, socialise and then compete in the race which for many of us was our only race of the year. Nowadays it's different. The drivers don't know each other and it's all a business.
'A lot of people in those days thought that we were really something, but compared to now those cars and that type of racing was like your grandmother going down the street to do shopping.
'All we had were street cars with maybe one or two modifications and before the race about all we did was have a tune-up and a valve grind for preparation.' Hardwick, a retired Cathay Pacific pilot, said he fell into racing almost by accident. Born and raised in Hong Kong, Hardwick, the son of a British Army captain, said he had raced motorcycles around the then undeveloped New Territories.
After buying a Triumph TR2 to drive around Europe on holiday, the service manager for Far East Motors Eddie Carvalho, winner of the initial 1954 Grand Prix, entered his car in the race without telling him.
'Eddie was a crazy guy and it was just like him to do that and at the time they were scraping to get as many people down to Macau as possible. I had been racing in a few hill climbs with the Hong Kong Motor Sport Club and done alright so I thought why not.' After finishing out of the running in the '55 race with a blown engine and missing the 1956 GP due to work commitments, Hardwick's luck in Macau started to change with the purchase of a 1957 AC Ace Bristol sports car. Over the next two years he would go on to two consecutive second-place finishes.
With his newly acquired Jaguar, Hardwick got off to a terrific start in the 1959 GP leading the pack until disaster struck at the foot of San Francisco Hill. Climbing up Hospital Hill, Hardwick noticed the race officials and members of the crowd frantically waving flags to get him to stop. An overcrowded pedestrian footbridge had collapsed onto the track injuring 21 people. The race was stopped for 90 minutes to clear the twisted bridge and assorted debris.
When the race resumed, Hardwick again got off to a great start pulling away from the rest of the pack pursued by Australian Bill Wyllie. By the halfway mark of the race, Hardwick had a comfortable lead and went on to finish a lap ahead of Wyllie. With victory almost certain, Hardwick went out with a bang in lowering the lap record by more than seven seconds. After four attempts Hardwick had finally won at Macau.
Publicada por João Botas à(s) 15:34