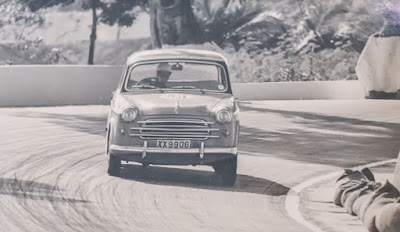 Do livro "The family history and photobiography of Fernando and Maria Fernanda de Menezes Ribeiro" escrito por Peter Grills retirei um excerto sobre a faceta 'desportiva' de Maria:
"Maria Fernanda says that from a very young age she had been fascinated by cars. This was very unusual for a girl in Macau in the 1930s, when even adult women rarely drove. She says she learnt to drive by sitting next to her father's chauffeur and watching. Soon he would let her steer the car from beside him, while he worked the gears and pedals. Certainly by the age of 12 she was able to drive. We know this because of the escapade related above, when, as Maria Fernanda recounts, she was seen driving on her own by the Macau Chief of Police. After that she was more circumspect about driving the car until she got her licence at 17.
It was not until some years later, after the family had moved to Hong Kong, however, that she began her involvement in competitive motor sport. In 1954, both Maria Fernanda and Fernando began competing in time trials in Macau, using Maria Fernanda's father's car, a Vauxhall Velox. Also about that time Fernando was involved in the establishment of the Hong Kong Vespa Club, and again both of them competed in club events – sometimes with eight-year-old Margarida riding as pillion passenger in novelty events.
Maria Fernanda's more serious involvement in motor racing began in 1956, when she competed in – and won – the first women's race at the Macau Grand Prix event. Driving a dealer-sponsored Fiat 1100 sedan, Fernanda beat women driving more fancied sports cars such as MGAs. 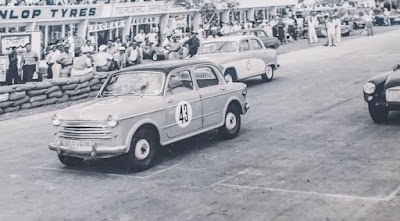 This did not just happen, though – for weeks before the event, which was on a hilly street-based course around the outer harbour and reservoir of Macau, Maria Fernanda practised driving around the course at speed in the early mornings. This became a regular sight, and Fernanda recalls driving by the army barracks as she practised, and being cheered on by the troops. On the race day itself, a family friend recalls that Fernando was more nervous than Maria Fernanda, and as he watched the race he was heard whispering 'Fernanda, be careful, remember the children' each lap as she drove past them. She was careful, and she went on to win. But even then, her mischievous side came out, and the Hong Kong newspaper of the next day records how, at the end of the race 'Hordes of photographers and officials rushed to the line. She drove up at speed, braking inches from them, sending the lot scurrying.'
Maria Fernanda also competed in 1958 and was hot favourite to win; however, by then the event had become better known internationally, and an American lady came from Okinawa, driving a Triumph TR3, and Maria Fernanda came second, still driving the Fiat 1100 sedan. (...)"
Publicada por João Botas à(s) 13:37