On the Leal Senado (Municipal Chambers) is an inscription "Cidade do nome de Deos nao ha outra mais leal," which is, " City of the name of God, there is none more loyal." This inscription was placed there by command of King Dom Joao iv., at the time of the restoration of the Portuguese Monarchy, as a recognition of the loyalty of the Macaenses in giving their allegiance to Portugal instead of to Spain. 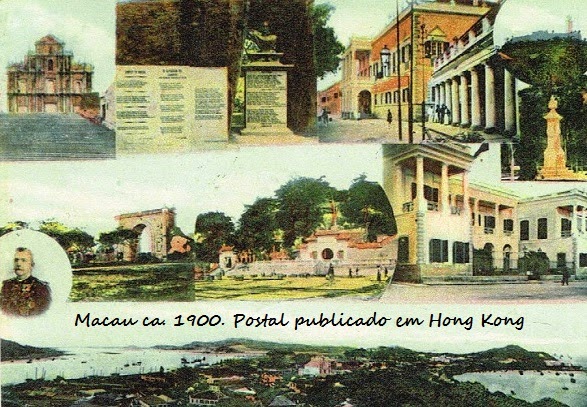 Mr. Chun Fong, a Chinese millionaire, has a fine house on the Praya Granda and a country house at the village of Wong Mo-Tsai, which was his native place. His history shows how much the world is alike everywhere. As a poor country lad he went to California, and from there to the Sandwich Islands, where he amassed a fortune, becoming, according to the tale, the wealthiest man there. After forty years' absence he returned to his native place, purchased land, and built himself a beautiful house surrounded by fine gardens, and no doubt was ambitious of founding a family and becoming a personage.
But the great attraction for me, and what really had brought me to Macao, was Camoens' garden and grotto. Here I spent many pleasant hours with his great poem in my hand. The
gardens are quaint in themselves, with great masses of granite boulders, and they were given to the town by Lourengo Marques.
Luis de Camoens was born in Lisbon in 1524. In 1545 he fell in love with Senhora Donna Catherina de Athayde, one of Queen Catherine's ladies of honour, and for that was banished by King John n. to Santarem, on the Tagus, and later was sent to Ceuta, in Africa, to serve as a soldier. He lost his right eye in a fight with pirates in Morocco. He went to the East in 1550, and at Goa received news of the death of his beloved Donna Catherina. He then became an ardent patriot and commenced writing his famous epic Os Lusiadis. He wrote a satire on the Portuguese Government at Goa, was banished to the Moluccas for a year, and was then made Administrator of Estates of Absentees and Dead at Macao; but on his voyage there he was wrecked off the coast of Cambodia, near the mouth of the Wukong, and lost everything save the MS. of his poem.
It was in the Holy City " that is, Macao " he spent many hours in these gardens finishing the Lusiad. The grotto " where he wrote and thought " is formed of natural granite boulders, amongst which is placed his bust. Sir John Davis, Sir John Bo wring, Rienzi, and others of various nationalities have written poems in his honour, and these, inscribed on tablets, are affixed to the rocks. He died at Lisbon, and is it necessary to say, in great distress and poverty ? I do not think his immortal work is much read now in England " or perhaps in Europe. But when I first entered Camoens' garden I felt I had won another great goal in my pilgrimage, and my face was hot and my heart fluttering at the thought of it. 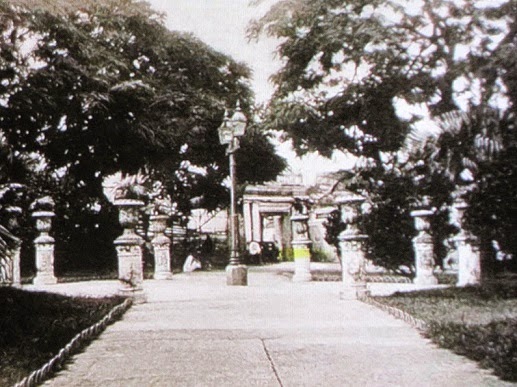 That being so, it can be guessed what it meant to me to saunter through those shady paths or sit in that grotto, and read what he had written on that spot. The scene I looked on he had looked on, the very fragrance that was in the air he too had inhaled, and there were his words composed and written on the spot! No wonder he is a very real person to me, and that the music of his words raises pictures for me others may not perhaps see.
When he sailed for the East his last words of reproach to Portugal were "Ungrateful country ! thou shalt not even possess my bones." But even in that he was defeated. I believe it was an Englishman, Mr. Fitz-Hugh, who at Macao did so much to make these gardens a monument to the poet.
But his real monument is his undying poem, and where his enemies have passed into oblivion Camoens lives or, as he says himself in the charming lines of the epic "The King or hero to the muse unjust Sinks as the nameless slave, extinct in dust." When I departed from Macao at eight o'clock one morning, it was to enter into a dense fog, in which the steamboat lay at rest for nearly two hours, the Captain keeping a sharp look-out on the junks, whose sails now and then loomed near us through the grey blanket. It was a strange experience lying motionless there in that grey world, with hundreds of incessantly talking Chinese padlocked down on the deck below us. Suppose, in the fog, a swarm of yellow-faced figures had suddenly boarded and overpowered us, and liberated those hundreds below us?" it might easily have been. And though I like the Chinese, I have always said that I should have a horror of being put to death by them. I do not know why, but the repulsion at the idea is there. (...)
Excerto de "Scented Isles and Coral Gardens - Torres Straits, German New Guinea, and the Dutch East Indies" da autoria de C. D. Mackellar (1912)
Publicada por João Botas à(s) 11:05