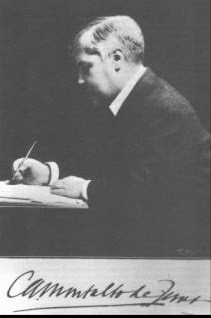 Hold on folks! It is very clear that comments on the Montalto book since its republication in 1984 by Oxford University Press have had a series extremely disturbing inaccuracies that cast doubt on the ability of past analysts to properly evaluate the 1926 Montalto text. These problematic issues are thoroughly detailed in my disseration from 2009 available from the HKU library website (Macau: the Port for Two Republics).
I spent an extraordinary amount of time attempting to pin down the place and death of Montalto's demise and was finally able to locate that in Shanghai in May 1932. The publications since 1926 completely omit the historical context in which Montalto's book was published:  this includes that by Oxford University Press in 1984, the Portuguese version by Livros do Oriente in 1990 and the Chinese version from the Fundação Macau 澳門基金會 in 2000.
All assert first that Montalto died in Hong Kong in 1927, when merely a short a review of existing microfilms in Macu's library or Carl Smith's card index would have determined that this was not the case.  He died in Shanghai in May 1932.  Further, none discuss the Portuguese military coup of 28 May 1926, the creation of the Comintern's Whampoa Military Academy in the same time frame, Montalto's condemnation of Sun Yat-sen, or his call for a "Japanese implemented solution" to China's chaotic social situation.
To date there does not appear to have been any attempt to look into the Macau legal records to support charges that the destruction of his book was a "Nazi-like" book burning. Montalto was, in fact, fined $400 for his 1926 antics in getting his highly inaccurate, incomplete and misleading 1926 reworked text published. And Stuart Braga is very accurate when he reported that Jack Braga's diary at the National Library of Australia reports that in March 1929 Montalto had himself suggested the books be burned. Indeed, how long was the Macau govt to hold the texts for which Montalto owed the $400?
The left of center Macau governor under whose administration the book was confiscated was Colonel Maia Magalhães, appointed by the leftist PRP Portuguese Republic premier Antonio Maria da Silva in 1925. He had been Chief of the General Staff of the Repubican armies when they counter-attacked at Monsanto during the "Monarchy of the North."
Far from a right-wing attempt to repress speech, the actions of the Macau government were an attempt to keep Macau from falling afoul of the powerful revolutionary army that the KMT-CCP were creating in 1926 at the Wampoa military academy not many miles to the north of Macau in Canton. Montalho and his publicitists in the main Hong Kong  newspapers at the time seemed to be oblivious to that threat.  A year after the death of Sun Yat-sen and as Chinese nationalists were struggling against a powerful Japanese military, just how and why was Macau going to be able to keep in circulation a text that condemned Sun and lauded Japan? The Montalto book confiscation & mis-adventure had nothing to do with the regime of Antonio Oliveira Salazar, who only became Minister of Finance in 1928, and premier of Portugal in 1932.
Publicada por João Botas à(s) 07:16