Pan Am: Rota do Pacífico

The airline won the contract for a San Francisco-Canton mail route in 1936.later that year and operated its first commercial flight carrying mail and express in a Martin M-130 from Alameda to Manila amid massive media fanfare on November 22, 1935. The five-leg, 8,000-mile (12,875 km) flight arrived in the Philippine capital on November 29 and returned to San Francisco on December 6, cutting the time of travel over that by steamship by more than a full month.[citation needed] (Both the United States and Philippine Islands issued special stamps for the two flights.) The first passenger flight over this route left Alameda on October 21, 1936. The fare from San Francisco to both Manila and Hong Kong in 1937 was $950 one way and $1,710 round trip. 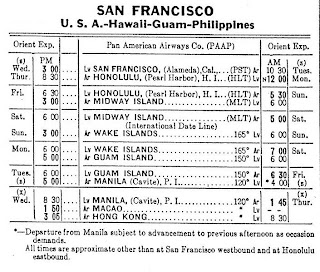 Logótipo da Pan Am entre 1928 e 1944
Notícia da revista Times em 2 de Junho de 1941:
This week the 42½-ton California Clipper sat down on the dirty, boat-infested waters of Singapore Harbor, thus completed the first scheduled Pan American Airways trip from San Francisco to Singapore. To U.S. shippers and businessmen this meant that travel time to Singapore had been cut from 25 days by steamer to six. But to diplomats it meant that the U.S., Britain and The Netherlands had formed a united front against further Japanese airline penetration in the area.
Japanese penetration dates from 1937, when a Pan Am affiliate had to quit its Shanghai-Hong Kong feeder line because Japanese bombs made Shanghai unhealthy. A year later, using Douglas and Lockheed planes made in Japan with the help of U.S. technicians, Japan started a vast airways network with Kyushu Island as main roost for transports.
Now planes of Japanese-controlled Dia Nippon Airways regularly take off in four directions. To the northwest they go to Dairen, Mukden and Hsinking in Manchukuo; to the south they reach the tiny islands of Palau, 500 miles closer to the U.S. than the Philippines, continue on to Portuguese Timor in the East Indies; to the west they roar to Shanghai, other Chinese cities; to the southwest they fly over Formosa to Canton, then over French Indo-China to Bangkok in pro-Japanese Thailand. The eastern and western arms of their airlines form a giant horseshoe around the Philippines (see map). To gain these far-flung routes Japan used fat subsidies, even bullets. They shot down at least two defenseless, passenger-carrying planes of competing China National Aviation Co.
But no smart Japanese pilot would shoot down a Pan Am plane. Japanese external airline expansion probably has come to a temporary end. At Singapore, Pan Am will hook up with Dutch-owned KLM airliners flying to The Netherland East Indies and Australia, British flying boats leaving Singapore for northern and western points.
Gold & silver, banknotes, securities and precious stones can now fly on U.S. planes all the way from San Francisco to Singapore for $2.38 a pound v. 14¢ for parcel post. Passengers can make the trip (semimonthly flights alternate with the trip to Hong Kong) for $825 ($485 minimum by steamer). But the new 1,500-mile Manila-Singapore hop is not likely to be self-supporting for some time. In Manila everyone regards it as an extension of the U.S. diplomatic arm—right to the heart of Britain's Far Eastern trouble zone. 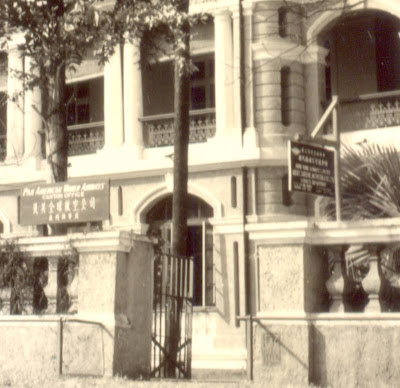 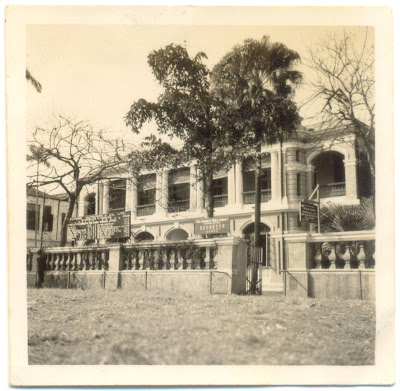 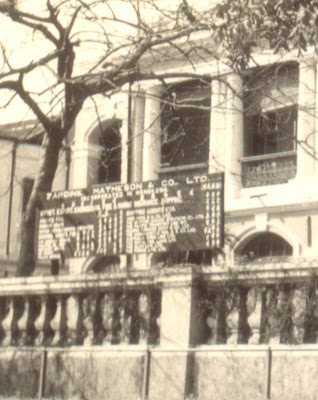 A Jardine Matheson & Co surgiu em 1832 na China. Começou com o comércio do chá e do ópio. É impossível falar da história de Cantão, Macau e Hong Kong no século 19 sem mencionar esta empresa que hoje em dia é um império financeiro. A sede fica em Hong Kong mas os negócios estão espalhados um pouco por todo o mundo, incluindo Macau. Segue-se um texto que faz um resumo da história da empresa.
Jardine, Matheson & Co. was formed by William Jardine (1784-1843) and James Matheson (1798-1878) on 1 July 1832, following the restructuring of the China firm Magniac & Co. The new company was the first to send private shipments of tea to England when the East India Company's trade monopoly with China ended in 1834. It was based initially at Canton, but was forced to move its main office to Macao in May 1839, in response to the activities of the Chinese authorities. Jardine retired during 1839, leaving Matheson in charge of the company's operations until 1842, when he also returned to England.
The company promoted the founding of Hong Kong during the 1830s. It purchased the first plot of land there in 1841, and transferred its main office from Macao to the new colony in 1844. Over the course of the next decade, the firm opened new offices, and began to handle a wide range of imports into China, such as coal, metals and machinery. The company inaugurated the steam cargo line from Calcutta to China in 1855, and opened offices in Yokohama, Kobe, Nagasaki and other ports from 1859 onwards.
In its early years, the firm was heavily involved in the opium trade. By the 1860s, however, the company's share of the trade was decreasing, and by 1872 its involvement had virtually ceased. This period saw the firm begin to engage in service operations alongside imports and exports. It expanded its banking and insurance interests, and also undertook infrastructure projects in Hong Kong, including the establishment of the first inter-office telegraph in 1869. By 1865 the firm had expanded to 20 shore offices and agencies in the Far East, Great Britain and the United States.
In 1871 the company withdrew from the 'Country Trade' with India to concentrate on its other interests. It pioneered sugar-refining in Hong Kong with the formation of the China Sugar Refinery Company, and entered the railway industry with the building of the first railway from Shanghai to Wuhan in 1876. By the 1880s, its interests in China extended to wharves, warehouses, cotton mills, mining and engineering. This period saw the founding of the Indo-China Steam Navigation Company (1882); Hongkong Land (1889), which became the firm's main property development arm; and the Jardine Spinning and Weaving Company (1897). The company's involvement in China's railways continued with the establishment of the British and Chinese Corporation in 1898. The following year, it was handed responsibility for completing the line from Tientsin to Mukden and Newchwang, and further rail contracts followed.
Jardine, Matheson & Co. became a limited company in 1906. By this time, the heart of the firm's business was in Shanghai, and the head office was based officially in the city from 1912. The first decades of the twentieth century witnessed a further expansion of the firm's operations. In 1921 it amalgamated its Chinese cotton mills to form the Ewo Cotton Mills. Two years later, it established the Jardine Engineering Company, which introduced fluorescent strip-lighting into Hong Kong in 1940. The outbreak of war with Japan in 1941 forced the firm to relocate its main office to London, but it was one of the first companies to resume business in China and Hong Kong once the conflict ended, and it returned to Japan in 1947.
The company revived its shipping activities after the war, and also established Jardine Airways. The head office returned to Hong Kong in 1950, although the firm was forced to close its offices on mainland China in 1954. The company's first formal reports and accounts were issued in 1955, and it was listed on the Hong Kong Stock Exchange in 1961. Jardine Matheson expanded into hotels and the supermarket sector in the 1960s, and founded Jardine Insurance Brokers and the joint venture Jardine Fleming during the following decade. In 1984 the company's headquarters were transferred to Bermuda. Jardine Matheson's motor interests were combined in 1990 to form Jardine International Motors, and in 1997 Jardine Insurance Brokers merged with Lloyd Thompson to form Jardine Lloyd Thompson, which became the U.K.'s leading listed broker.
Publicada por João Botas à(s) 19:00