A 16 de Maio de 1971 a agência noticiosa APN disponiblizou esta fotografia com a seguinte legenda: "Macao, a 6 mile square outpost of Portugal, exists in the shadow of its giant neighbor, Communist China. It survives because at present for economic reasons China has more to gain than lose by allowing continued Portuguese of the small peninsula and its two nearby islands, Taipa and Coloane. Macao is a quiet backwater with na estimated population of 300,000, 98 per cent of whom are Chinese. Perhaps only 2,000 are pure Portuguese, but the Portuguese in Macao remain proud of their traditions and their past." 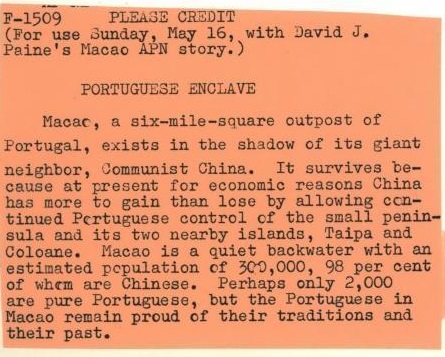