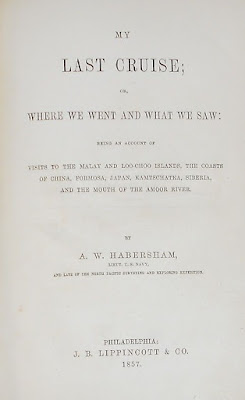 "My Last Cruise; or Where We Went and What We Saw: Being an account of Visits to the Malay and Loo-Choo Islands, the Coasts of China, Formosa, Japan, Kamtschatka, Siberia and the Mouth of the Amoor River".
Livro da autoria de A. W. Habersham, tenente da marinha norte-americana. Publicado em Filadéfia por  J. B.  Lippincott & Co. em 1857.
Excerto sobre Macau e Cantão:
Macao is remarkable for its pure air, cool temperature, fine summer retreats, and as the residence of Portugal's great epic poet, - the second Milton - Camoens the beautiful. We visited his cave, the birthplace of his most glorious lines, and went away with sad thoughts of his brief though brilliant advent.
So much for the first three. And now for Canton, the city of a million or more, and the grand centre of butchery, the great slaughter-house through which passes much of the surplus population of China, entering as men and cast out as headless trunks,—the victims of civil war. I again turn to my journal, the Hancock having been ordered up the river for a few days: - "We left our ship, which was anchored above the  'Factories,' and pulled toward the 'gardens' through such numbers of boats that it was almost impossible to make any headway. We were half an hour in accomplishing a distance which, had it not been for those closely-packed sampans, could have been passed over in five minutes. While thus elbowing our way through them we passed a junk, upon the bow of which several Chinamen were standing with long bamboo poles in their hands: they seemed to be bearing something clear of their cables,- something which the tide had swept afoul of them. This something proved to be the dead bodies of three Chinamen, bodies without heads, - bodies of men who had been decapitated by either the mandarins or rebels, tied together by the feet, and then cast into the river to save the trouble of burial. They were shoved clear of the cable, and then went drifting on, borne upon the changing flow of the muddy stream, to be returned again by the rising flood, like any useless barrel or water logged piece of driftwood. Such is life in China. I once heard from good authority that it was no uncommon thing for a person to take the place of the condemned unfortunate, provided said condemned would pay a stipulated amount to the friends of the self-offered victim. "Leaving this revolting scene behind us, we pulled into a basin on the river's bank, the mouth of which was guarded by a floating log, and the quiet bosom of which was covered by scores of the light egg-like boats known as sampans or Tanka-boats. These admirable little passage-boats are sculled by a single girl generally, though they are often the homes of a whole family. One would be surprised to see the great number of Chinese who live in boats. This basin was probably a hundred feet in diameter, and after crossing it we reached a flight of heavy. (...)
Publicada por João Botas à(s) 08:06