John Thomson (1837 - 1921) was born in Edinburgh, Scotland. He first came to Asia in 1862 and visited Singapore, Sumatra, Thailand and Cambodia. In the 19th century, most Westerners coming to the East were priests, business people or were posted to work there. Thomson was different. He was attracted by this remote land with a long history.
In 1868, he made his second trip to Asia and learned Mandarin Chinese in Hong Kong. He took the chance and visited Guangdong Province three times. In 1870, he began an extensive two-year journey, visiting Guangdong and Fujian provinces and Taiwan before heading to eastern and northern China, and finally to Beijing, the capital city, from where he turned southward to the regions around the Yangtze River. The journey covered a total of 8,000 kilometres. 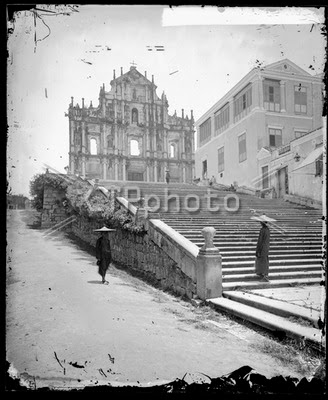 This experience made Thomson the first foreigner to document the facets of Chinese society with a camera. Appearing in his works were palaces and landscapes, imperial nobles and street people. Using the wet plate collodion develping process, his works vividly recorded many fine details and were not inferior in quality to those of today. But his devices were so bulky that he had to hire several coolies. In the 19th century, few Chinese had seen any foreigner, let alone the modern technology of a camera. Naturally Thomson encountered much misunderstanding as the Chinese feared that his camera would bewitch them.
Informações sobre a vida e obra de Thomson neste link
http://macauantigo.blogspot.com/2009/09/john-thomson-1837-1921.html
Publicada por João Botas à(s) 19:28