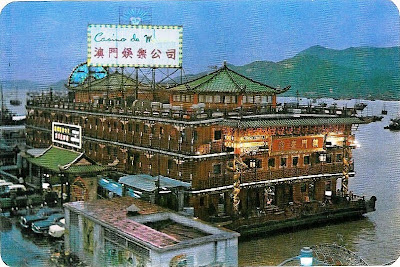 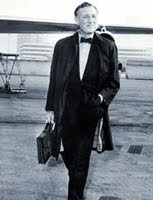 Thrilling Cities, livro de 1963
The book is a collection of articles originally written for the London Sunday Times examining 13 cities throughout the world based on two trips Fleming took between 1959 and 1960. As Fleming states in the opening of the book, the idea originated in October 1959 when Sunday Times features and literary editor Leonard Russell suggested that he should make a ’round trip of the most exciting cities in the world and describe them in beautiful, beautiful prose.’
On 2 November, Fleming set off for a 30-day journey to visit Hong Kong, Macau, Tokyo, Honolulu, Los Angeles, Las Vegas, Chicago and New York. The series of articles was a success for the Sunday Times and in the spring of 1960, they convinced Fleming to head off once more, this time for a tour of the following European cities: Hamburg, Berlin, Vienna, Geneva, Naples and lastly Monte Carlo.
Finally in 1963, the two sets of articles were combined together and the result was Thrilling Cities: a would-be ordinary travel book turned extraordinary and well worth picking up for any fan of Fleming or James Bond. "Thrilling Cities" is the description of Ian Fleming's itinerary to some of the world's most exotic places. The keen senses which were employed to write gripping thrillers are evident; a detailed, descriptive work is the result. Fleming was given generous finances for his trip, and spares little in eating at the best restaurants, sleeping at posh hotels, and mingling with city officials
Artigo de Jeffrey Hill
In 1959 Fleming took a trip around the world visiting key cities and reporting about them to the Sunday Times. A compilation of these articles was published in book form in 1964 under the title of Thrilling Cities, the same year as his death. Cities traveled included: Hong Kong, Macau, Tokyo, Honolulu, L.A., Las Vegas, Chicago, New York, Hamburg, Berlin, Vienna, Geneva, Naples, and Monte Carlo. In lieu of my own budget, I plan on posting on Fleming's trip vicariously, starting with Macao. The following is Fleming's trip to the Central Hotel, which he describes as a nine-story skyscraper which isn't exactly a hotel. It is devoted to human vices. And the "higher up the building, the largest in Macau, the more beautiful and expensive are the girls, the higher the stakes at the gambling tables, and the better the music." In the excerpt, Fleming has just described the rules and ambiance of playing fan-tan at this din of sin.
Having educated ourselves in these matters [gambling], Dick Hughes and I repaired to our sixth-floor dance hall to see how Mr. Foo was handling the second human vice. The place had a central, well-lit dance floor and a well-disciplined eight-piece “combo” playing good but conventional jazz. In the shadows round the walls sat some twenty or thirty “hostesses.” Dick Hughes and I arranged ourselves at a comfortable banquette in the sparsely frequented room and ordered gins and tonics and two hostesses. Mine was called Garbo, “same like film star,” she explained. She wore a pale-green embroidered cheongsam and a “Mamie Eisenhower” bang rather low on the forehead. She had the usual immaculate ivory skin and the conventional “almond” eyes, which were bright with intelligence and a desire to please. Rather startlingly, she appeared to have black lipstick, but as my eyes grew accustomed to the light, this turned crimson. Dick’s girl was a trifle older, perhaps thirty-five, wore a beige cheongsam, and was more forward and vivacious than Garbo. They asked for lemonades, and for a while we made the usual rattling, gay, and highly artificial night-club conversation. When, in my case, the springs threatened to run dry, I fell back on the hoary gambit of reading my partner’s hand.
Through experience in this science, dating back to my teens, I have acquired a crude expertise in palmistry, and with my first pronouncement that Garbo had three children, I hit a lucky jackpot. The two girls chattered excitedly and, realizing with awe that her hand was being held by a great soothsayer from the West, perspiration rose in Garbo’s palm and she was hard put to it to keep this dew at bay with a paper napkin. In the reverent hush that ensued, looking alternately into the dewy palm and the reverent almond eyes, I solemnly warned her that her heart was not ruled by her head, that she had artistic leanings which had not yet come to fruition, that she would have a serious illness when she was about fifty, and finally, provocatively, that she was inclined to be under-sexed. This last pronouncement was greeted with much hilarious protestation which drew two more girls to our table and involved me in a further hour of miscellaneous prognostication and consumption of gins and tonics.
Text by Jeffrey Hill
aspecto de Macau na época em que foi visitada por Ian Fleming 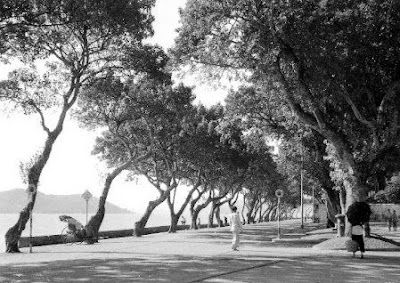 Do blog dos autores do livro "Secret Places, Hidden Sanctuaries: Uncovering Mysterious Sights, Symbols, and Societies", Stephen Klimczuk e Gerald Warner
I recently picked up a copy of Ian Fleming’s Thrilling Cities, the James Bond creator’s early 1960s world travel guide “focused on the bizarre and perhaps the shadier side of life.” It’s an amusing period piece. The Sunday Times of London sent Fleming on an all-expense-paid, round-the-world jaunt, in first-class on BOAC. His fuel, as always, was a near-lethal level of consumption of booze, cigarettes, and buttery scrambled eggs on white toast. (The only vegetable matter that ever passed his lips appeared to be the chives on his eggs.)
His second stop, after Hong Kong, was the then-seedy Portuguese colony of Macau (where I myself had a fascinating visit several years ago). Fleming was on the trail of a man he hoped would fit the bill of a genuine Bond villain — the mysterious Dr. P.J. Lobo, who was said to control much of the world’s trade in gold. As he writes,
Irresistibly attracted, I gravitated towards him, the internal Geiger counter of a writer of thrillers ticking furiously.
Not only did Macau have no income tax or exchange controls, it was not subject to the Bretton Woods agreement which artificially fixed the gold price at an unsustainable $35 an ounce. The Doctor was said to have ingeniously exploited that loophole, buying gold at the official price and legally re-selling it at a higher unofficial market price to anyone who cared to visit Macau. Where they took it afterwards was their business.
So Fleming carefully arranged an introduction, and was ushered to the Doctor’s mansion, the Villa Verde. The Catholic religious art there didn’t reassure Fleming the agnostic, nor did the “powerfully built butler, who looked more like a judo black-belt than a butler” — who offered Johnny Walker. The Doctor was charming, and, on request, played some of his compositions on a gramophone. (He was an amateur composer.) They talked of gold, kidnapping, criminal brotherhoods, and opium:
“It is a terrible thing, Mr Fleming. These people give all their money for opium. Soon they lose their interest in food… They become sexless, neuter, and waste away. It would be much better if they drank beer, even too much beer, as I believe is sometimes the case in your own country. But what do you think of my coffee? This is my own coffee from my estate in Timor.”
In the end, they parted, Fleming concluding the Doctor was not the villain he had hoped to find — but rather a “careful, astute operator” who was actually a rather respectable, public-spirited fellow. Fleming, waxing philosophical, continued touring Macau, in search of high-stakes fan-tan and dens of vice. He found them.
Publicada por João Botas à(s) 15:38