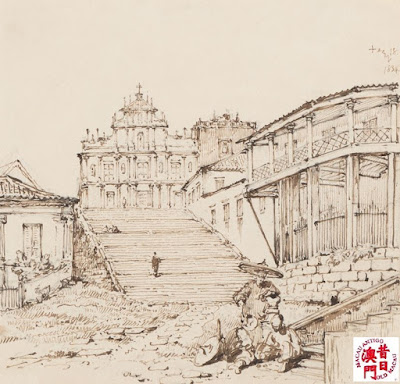 "That evening, Nathaniel proposed by way of varying our walk a little, to visit the Catholic Cemetery which is on the other side of town, and we went consequently through many of the back streets where I had never been before except in a chair, so the scene was quite new to me, and it seemed very like the pictures of old European cities which we see......the facade of an old church (the remainder of which was destroyed by fire) remains standing and is ornamented with many statues, the largest and most prominent of which is one of the Virgin Mother. (...) an image of Virgin Mary flanked by a peony and a chrysanthemum, a Chinese dragon, a Portuguese ship, and a demon of indeterminate origins."
O excerto acima é de uma carta de 1 de Fevereiro de 1845 escrita por Rebecca Chase Kinsman e dirigida à irmã nos EUA. O Nathaniel referido na carta era o marido de Rebecca. A ilustração que escolhi para o post é um desenho de George Chinnery feito em 1834. O britânico, radicado em Macau desde 1825, era conhecido da família Kinsman e é referido numa outra carta de Rebecca datada de 16 de Maio de 1844:
Went to Mr. Chennery's rooms by invitation from him. ...Some of the old painter's sketches of Chinese scenery, and groups of Chinese variously occupied, are remarkable true to life, and display great talent. He is a remarkable old man, a very disagreeable one however, on account of his vanity..."
Publicada por João Botas à(s) 09:30