Below the Portuguese Company SVC in 1906 .The SVC was largely armed and uniformed from British stocks with Australian style slouch hats, though some nationalities wore their own army uniforms with SVC insignia. 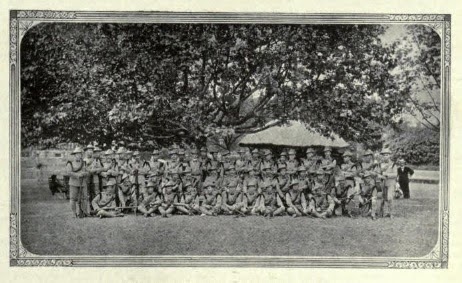 The Shanghai Volunteer Corps (SVC) was a multinational - mostly volunteer - force that existed from 1853 to 1942. It was controlled by the Shanghai Municipal Council which governed the Shanghai International Settlement.
The SVC was created on 12 April 1853 during the Small Swords Society's uprising. It saw action alongside British and American military units in the 1854 'Battle of the Muddy Flat', when Qing imperial troops besieging the rebel-held city ignored foreign demands to move further away from the foreign concessions. Concerned that the Qing forces were drawing rebel fire into the settlements, the foreign consuls and military commanders authorised an attack on the Qing forces to dislodge them. The operation was successful, and the battle was thereafter commemorated as an important event in the history of the SVC. The Corps was disbanded in 1855 but reestablished in 1861. In 1870 the Shanghai Municipal Council took over the running of the SVC.
The unit was mobilised in 1900 for the Boxer Rebellion and in 1914 for the First World War. In 1916 the British recruited Chinese to serve in the Chinese Labour Corps (CLC) for service in rear areas on the Western Front to free troops for front line duty. Many members of the SVC served as officers in the CLC.
Prior to 1914 some of the national contingents wore distinctive parade uniforms at their own expense, modelled on those of their respective national armies.
At various times during its history the Shanghai Volunteer Corps included Scottish, American, Chinese, Italian, Austro-Hungarian, Danish, German, Filipino, Jewish, Portuguese, Japanese, White Russian and Eurasian companies, amongst others. British War Office supplied weapons and a commanding officer. The German and the Austro-Hungarian companies were disbanded in 1917 when China declared war on Germany.
The SVC was disbanded early in 1942 after the International Settlement was taken over by the Japanese. The decision was formally made by the still existing Shanghai Municipal Council who held a reception to mark the placing of the Corps' colours "in a place of dignity and honour" in the Council chambers
Publicada por João Botas à(s) 17:59