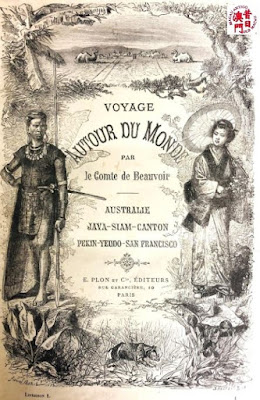 "Java, Siam, Canton: Voyage Autour Du Monde", de Ludovic marquis de Beauvoir, foi publicado original em francês no ano de 1869.  Como o título indica trata-se do testemunho de uma viagem à volta do mundo que passou por "Australie - Java - Siam - Canton - Pékin - Yeddo - San Francisco", Hong Kong e Macau.
A obra de 3 volumes teve várias edições e traduções. A versão que escolhi para este post é a inglesa publicada em Londres em 1870.
Conde e depois marquês Ludovic Hébert assina uma obra que é considerada um dos melhores relatos de viagens da segunda metade do século 19, sendo inclusivamente premiada pela Academia de França na época.
Excerto do capítulo 27 do vol. 2 com testemunho sobre uma visita a Macau em Fevereiro de 1867.  Foi do território que a comitiva partiu rumo a várias cidades chinesas, incluindo Pequim.
O tráfico de cules é o assunto principal, mas aborda-se também o panorama do comércio e dá-se testemunho de uma visita à gruta de Camões, entre outros.
"We (...) take ship for Macao on board the Fire Dart an American two decked steamer where we have for travelling companions six hundred Chinamen with their wives packed together like anchovies. They are all peacefully smoking opium huddled up in their quilted wrappers to keep out the cold. (...) Three of this American Company's vessels have already fallen into the hands of the pirates thanks to the connivance of the passengers who secured the persons of the captain and crew when they had not courage to murder them. (...)
After a passage of three hours and half we rounded the harbour of Typa and the peninsula of Macao appeared to us lighted by the last rays of the sun the Portuguese flag floating over the steep fortifications which command this rocky country. Imagine seven or eight bold peaks crowned with red granite battlements an agglomeration of barren mounds reaching to within two hundred yards of the level of the sea succeeded by a chaos of houses with southern looking terraces for roofs and painted blue green and red a dozen church steeples windows barricaded with iron bars paved a alleys two yards wide winding through suburbs built in sugar loaf shape and below all this the circular harbour where thousands of junks are crowded together. Such is Macao. (...) 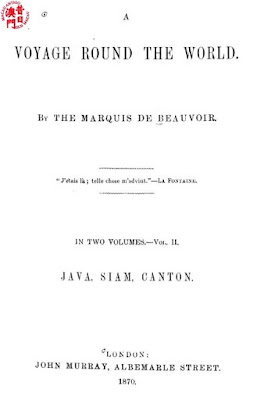 The most curious things here are the gambling houses for Macao is the Monaco of the Celestial Empire. Most of the wealthy Chinamen from Hainan, Kwang Tong and Tonkin are fools enough to come and lose their money here (...).  A patriarchal croupier with a white tail a beard consisting of four hairs well gummed together and immensely long nails presides at the table round which crowd hundreds of players. (...)
12th February
Our courteous guides to day have been in the morning Don Osorio the Governor's aidede camp and in the afternoon His Excellency himself Don José Maria do Ponte Horta, major in the artillery, with whom we have visited the whole domain no very difficult matter as it appears to be about three miles long by one and a quarter wide.
This promontory is of the exact shape of the impression of a human footstep of which the heel is turned to the sea while the big toe meets a tongue of land some four hundred yards wide which joins it to the great island of HianShan. The heel is formed of nine high rocky hills which command the forts of Bour Parto, Barra, San João and San Jeronimo. The inner curve of the sole is crowded with the houses of the Chinese who number a hundred and twenty five thousand. (...)
We inspected the barracks the monasteries the church of St Paul built by the Jesuits in 1594 and of which three parts have been destroyed by fire, Asylos dos Pobres, etc.... In short a whole series of old Christian buildings surmounted with crosses ornamented with images of saints in niches covered with curious frescoes. Add to these the mantillas covering the women's heads the huge long black hat under whose shade the monks walk about the white caps of the sisters of charity and one might swear that one was in the shadow of the basilicas of Lisbon or Genoa. (...)
Then we took the shore road under groves of evergreen trees washed by the waves (...) where we found ourselves in the Grotto of Camoëns. History relates how the great poet having been wrecked on these inhospitable shores only saving the first lines of the Lusiades reached by swimming the Portuguese colony then just coming into existence. He took refuge in this grotto washed by the waves and while weeping over his exiled lot sang the glories of his country. (...)
The twilight was nearly over as we came to the end of the domain of the colony and found ourselves on the narrow tongue of land which joins Macao to HiangShan. Two hundred yards from us on either hand the waves of the rising tide were breaking and the granite barrier of the Chinese Empire barred our forward way.  (...) 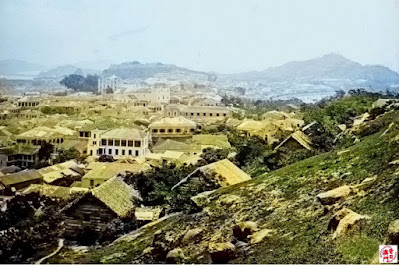 13th February
We are beginning to get accustomed to the wintry weather and long walks over the most interesting ground make the time pass quickly. On the summit of the Monte we visited first the ruins of a Jesuit convent and then proceeded to study the details of the most characteristic feature of Macao the Barracons the celebrated establishments for the pretended emigration of coolies more justly branded with the name of trade in Chinamen. The first shop of these human salesmen that we entered presented the most smiling exterior terraces decked with flowers great porcelain vases mahogany furniture in the reception rooms of the officials. (...) Every year about 5000 Chinese leave Macao for Havannah and 8000 for Callao. Certes and if this emigration were conducted by honest and disinterested officials it would be an immense benefit both to the country that is short of provisions and that which is short of labourers and we should hail with the liveliest sympathy the vessels which carry off the surplus of the most prolific population in the world from this country whose soil is not everywhere fertile and which is far from sufficing to feed all the dwellers on it. (...)
14th February
At six o clock this morning we went on board the Principe Carlos a beautiful gunboat lent by the Governor of Macao to the Prince* to take him to Canton. We skirted the rocky bays of the peninsula and gradually the Praye Grande the Guia fort where the first lighthouse in the China seas was erected the Monte and the battlements of the fortifications are lost in the dim horizon and we bade farewell to this colony, the last European outpost we shall see before the Celestial Empire itself Macao was the first beacon planted on the outskirts of China by the western navigators and its history is consequently connected with all the struggles between Europe and the great Asiatic power. (...)
Macao contains about 125,000 Chinese and 2000 Portuguese. In 1865 it registered only 206 vessels clearing the harbour against the 1000 of thirty years back. Its trade resolves itself almost into the importation of 7500 chests of opium worth 652 000l. and the exportation of tea to the value of 136 000l.
As you may easily imagine the imposts all fall upon the Chinese inhabitants and according to the fatal rule of Asiatic nations it is by taxing their vices that the largest profit is made. More than 100,000 piastres 20 000l. is drawn from the gambling licenses more than 12 000l. from opium and the Barracons and this is no small sum in a budget of receipts of only 47 500l. As regards expenses thanks to the insignificance of the place and the smallness of the salaries they only amount to 38 900l. The 8600l. of surplus flow into the coffers of the mother country where according to all accounts there is plenty of room for them. (...)
* o autor do livro acompanhou na viagem o duque Penthièvre, filho do príncipe de Joinville.
PS: imagens de ca. 1870 mas não pertencem ao livro e foram coloridas de forma digital.
Publicada por João Botas à(s) 17:02