Colonial Army of Portugal
The colonies of Portugal are quite extensive, those of Africa being of considerable importance. For administrative purposes the colonies are divided into seven governments of which five are in Africa, one in India and one in Oceania. They are Cape Verde, Guinea, St Thomas, Angola and Mozambique, India and Macao and Timor. (...) 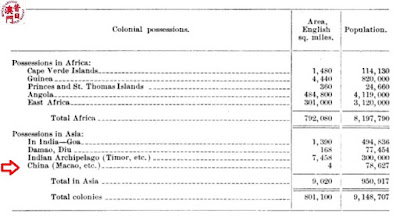 Macao
A battalion of infantry stationed in this district as early as 1869 constituted for a number of years the only force of the first line for Macao and dependencies but in 1876 a battalion of the Ultramar infantry regiment was sent there. In 1876 the strength of the officers at Macao and Timor was fixed at 1 colonel, 1 lieutenant colonel, 2 majors, 8 captains, 8 lieutenants and 12 ensigns and the old infantry battalion was disbanded and replaced by a police corps. When the Ultramar infantry regiment was disbanded in 1893 a company of artillery for Macao was created with a strength of 86 men, all Europeans, but the reorganization law of 1895 changed all the formation into two infantry companies at war strength.
in "Colonial Army Systems of the Netherlands, Great Britain, France, Germany, Portugal, Italy and Belgium". Vol. 34. United States. Adjutant-General's Office. Military Information Division, 1901.
Publicada por João Botas à(s) 17:52