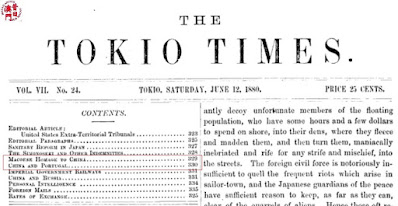 Aqui fica um excerto:
More than three centuries ago in the year 1557 a few Portuguese traders took up their residence at Macao. They had already settled on some of the neighboring islands but Macao offered many advantages and soon became an important trading station. At that time the China seas and rivers were infested with pirates. The Chinese government then in a most feeble condition and for a long time the marauders conducted themselves pretty much as they liked pillaging and destroying to their heart's content. So numerous and powerful had they become and so weak were the authorities that the latter instead of punishing were sometimes glad to make terms with them. The pirates on one occasion even went so far as to blockade the port of Canton. The Chinese then knew little of foreigners and the pirates imagined that the foreign traders would be a valuable and easy prey. So the native adventurers began to molest the Portuguese. But they found that the foreign devils were not to be overcome so readily and they soon had reason to regret having molested them.
The early Portuguese were hardy and daring men and they decided on making short work with these pirates. Manning and arming a few vessels they succeeded in raising the blockade of Canton and cleared the seas of the buccaneers. The foreigners thus rendered an service to the Chinese who thankful for such protection were probably glad to see Macao rise into strength and importance. The subsequent history of the settlement is pretty well known. The city grew and prospered. The ruins of stately churches and public buildings evidence former grandeur. But its glory has departed. Its trade has also ceased and the terrific typhoon of September 1874 laid great part of the place in ruins.
Macao is most beautiful situate, so beautiful indeed does it seem from the water it has been spoken of as a miniature Naples and Bowring described it as the Gem of the Orient earth and open sea.
Macao is rich in historical associations. It was here Camoeus composed the Lusiad, one of the noblest national epics and the gardens in which the great poet labored his masterpiece are carefully kept and shown with pride to the visitor. Even now there is a kind of mediæval and religious aspect about the place which seems to transport one centuries back. The wearied and debilitated of Hong Kong find the quietude and pleasant climate Macao an agreeable change and frequent visits are paid it during the hot summer months. But Macao, beautiful as it still is, and prosperous as it once was, is associated with an infamy that will never be forgotten. The old traffic - the slave trade in another name - had its home here. Ignorant Chinamen were sedneed from their villages often indeed openly kidnapped and brought to Macao where they were contined in barracoons till taken board the coolie ships to be despatched to distant. The horrors of the voyage were often as great as sufered by African slaves during the middle passage when they arived at their destination it was only to further and continued cruelties. (...) Attention is just now attracted to Macao in of a dispute about it between the governments of China Portugal. The sovereignty over the ancient foreign settlement has never been properly determined. For nearly centuries that was until 1818 a small annual rental an admission of China's authority over it. In that however the Portuguese governor refused to make the payment and his refusal it is said led to his being murdered by the Chinese. The Portuguese soldiers then attacked Chinese in the neighborhood; no rent has since been paid and Portugal claims the place as her possession. Chinese however have never admitted the claim and just refused the request of Portugal to formally announce latter's supremacy over Macao. It is a very old dispute but it is not strange that it should have cropped at the present time.
The London and China Express says It is difficult to understand why Portugal has made claim at all. We are afraid that our London contemporary notwithstanding that it devotes its special attention matters relating to China is not very far seeing in present instance. In view of a probable war China and Russia it is of very considerable importance know whether Macao belongs to China or Portugal. We already pointed out that during such a war Russia would have the right, as she probably has, the naval power to blockade the Chinese ports which for the time it might be or even years would put an end to all foreign trade .
Macao is Chinese territory as China has always contended - and against this contention there exists no international agreement - it may be blockaded. But if Macao belongs to Portugal it would remain an open port and the only one in China. The only maritime outlet for the foreign trade of vast empire it would rise into an importance which even its palmiest days it never approached. It will be seen therefore that the question of the sovereignty over Macao is of the utmost importance not only to the governments immediately concerned but possibly to all connected with Chinese trade; and that it is of the greatest consequence Portugal to obtain an acknowledgment of her claims. The present diplomatic dispute involves general tradal interests and its progress will be carefully watched, Shangai Courier."
Publicada por João Botas à(s) 13:24