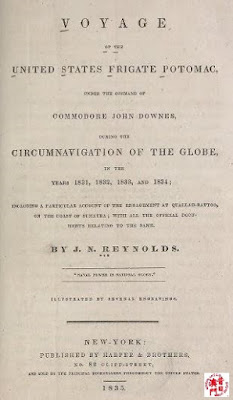 Excerto:
The town of Macao is in latitude 22 13 north longitude 113 46 east. The city of Canton is about sixty miles further inland in the direction of north northwest The whole bay or estuary is thickly studded with rugged and barren islands.
Macao is on the west side of the entrance built on a peninsula which is almost an island being joined to the main by a very narrow isthmus across which is erected a barrier or wall about two miles north of the town being the limit prescribed to the ceded territory to prevent any intercourse between the Portuguese and the liege subjects and citizens of the Celestial Empire.
This barrier was constructed in fifteen hundred and seventy three and the heaviest penalties were threatened to those who passed it in either direction. These restrictions however have gradually fallen into disuse and are not at all regarded at present. This site for a commercial establishment was ceded to the Portuguese as a recompense for an essential service they had rendered the Emperor of China. About the year fifteen hundred and thirty eight a pirate of notorious daring and success having under his command a considerable naval force took possession of this peninsula and was thereby enabled to block up the southern ports of China and even extended his audacity so far as to lay siege to Canton In this extremity the neighbouring. 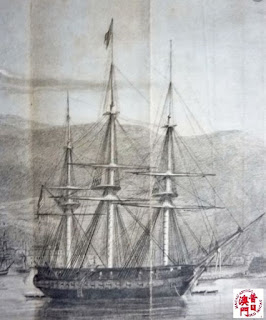 Mandarins applied for assistance to the Portuguese who had an establishment at Sancian an island on the coast with several ships of war in the harbour which were instantly despatched against the pirates. The Portuguese proved victorious and raised the siege and pursued the piratical chief as far as Macao where he put a termination to his own existence.
His band however or a nautical banditti of a similar class long continued to infest the islands coasts and rivers in the neighbourhood even until the year eighteen hundred and ten when they were effectually subdued by the joint efforts of the Portuguese English and Chinese.
When the Emperor of China was informed of the service which the Portuguese had rendered him on this occasion he bestowed on them the Peninsula of Macao as a mark of his gratitude. They had long wished to establish themselves upon a footing more solid than the one they had at Sancian and now proceeded with avidity to build a town on their new territory which soon became very flourishing being most advantageously situated for prosecuting a trade with Japan It is defended by three forts.
The approach to Macao from the sea is very beautiful in trie daytime and is not without its charms by a brilliant moonlight It was midnight when the frigate came to anchor in the road.
The following morning brought with it novelty if nothing more. The fleet of little boats were all in motion. The land around seemed broken into a thousand hills covered with stinted verdure Macao though distant looked beautiful and highly picturesque. Every thing was new to the beholder and strikingly characteristic of a foreign land. One reason perhaps why China and every thing connected with it imparts the idea of wonderful is that each stranger who visits this country is previously determined to be astonished at every thing he sees and hears nor will strange things be wanting. Early in the morning an officer was sent to communicate with the authorities of the town of Macao and while he was still absent on that duty the Potomac's anchor was weighed and her sails loosed. (...)
Publicada por João Botas à(s) 17:22