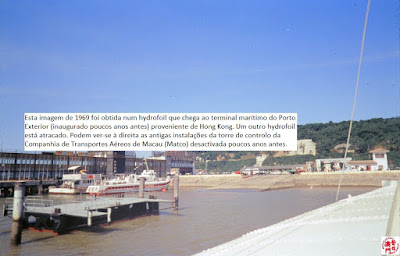 Macao Harbor (22,11 N 113,34 E) is a small harbor protected by breakwater. The harbor is accessible only to small vessels .The entrance of the harbor lies about 1 mile northeastward of the northeast extremity of Ilha de Taipa. The city of Macau is located about 1 2/3 miles northward of Ilha de Taipa at the south end of Ao men Tao.
Depths Channels
The 3 fathom curve lies about 3 miles eastward of the Outer ends of the entrance breakwaters. The 1 fathom curve lies in close proximity of the outer ends of the breakwaters. A channel with a depth of 0.3 m 1 ft to 1.8 m 6 ft leads northwestward between the breakwaters to an enclosed inner harbor. A marked channel with a depth of 1.9 m 6 1 2 ft to 2.7 m 9 ft leads southward of the south breakwater to harbor installations on the west side of Macau. Among these are the Macau-Hong Kong ferry piers.
The channel to the outer and artificial harbors is dredged to a depth of 4.6 m 15 ft Navigational aids Fortaleza da Guia a prominent fort stands on the summit of the Small peninsula on which the city of Macau stands. A light is shown from a circular tower on the fort A signal station and some yellow buildings are located near the fort. Four radio masts three of which are painted red and white stand on a hill in a position about 1,2 mile northeastward of the fort.
An observatory is located about 1,4 mile southwestward of the fort. Leading lights located seaward of the fort in range 305 lead into the artificial harbor The eastern and western sides of the artificial harbor is marked by a tower. A light is shown from each tower Numerous aids to navigation improve the approaches to and the harbor of Macao. The light list and best scale chart should be consulted for details of these aids Pedra d'Areca a rock which dries lies in the northwestern part of the harbor about 1 miles south southwestward of Fortaleza da Guia. It is marked by a lighted beacon.
Tides tidal currents
The mean tidal range is 5 feet. The tidal currents set strongly across the harbor entrance. (...)
A submarine cable crosses the harbor from the mainland southward of Fortaleza da Guia to the northern extremity of Ilha da Taipa.
Directions pilotage
Vessels not having recent local knowledge should not attempt to enter the harbor. Pilotage is compulsory. The pilot station is located about 1 mile westward of La sa wei.
Storm signals
The local storm signals code for Macau is the same as used at Hong Kong. Typhoon warning signals are made at the office of the Captain of the Port and at Fortaleza da Guia.
Channel signals
Vessels using the Macau channels by day shall carry at the mast two black spheres vertically arranged and by night two green lights on the yard arm similarly arranged.
Caution
Caution must be used when entering the harbor as in 1965 changes in the depths and navigational aids had taken place.
Water signal
To call for water the A flag should be hoisted. 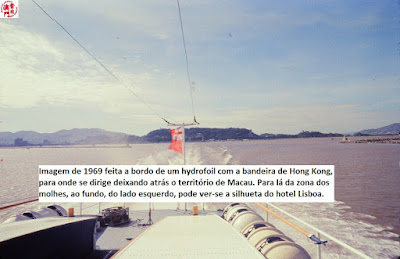 Macau is a Portuguese settlement located on the peninsula on the north side of the harbor. The city is built on the slope of hills which are 200 to 300 feet high. It is a free port and has a population of 169,300 1962. The principal exports are fish, fireworks, incense candles, matches, textiles and tobacco products. Imports include food and heavy machinery. There is a Meteorological Station at Macau.
Piers
The principal piers are on the west side of Macau. One of the largest piers has a berthing length of 140 feet and an alongside depth of 3.9 m 13 ft .The piers have no mechanical cargo handling equipment Lighters and tugs of up to 400 estimated horsepower are available.
The port has a 20 ton floating sheerlegs and a 15 ton hand operated job crane at the naval shipyard. At least twenty four warehouses serve the port.
Supplies
Fresh water reported brackish and requiring boiling and chlorination is laid on the piers and obtained from water boats. A limited amount of diesel oil in drums is available plus limited supplies of coal. Some provisions and stores can be obtained.
Repairs of a minor nature can be undertaken at the navy yard located near the southwest end of the Peninsula.
A 150 ton marine railway capable of handling vessels of up to 148 feet in length is located at the navy yard.
The drydock in Patane handles vessels up to 131 feet in length and 8 feet in draft. Several small shipyards build fishing vessels.
Communications
There is a radio Station at Macau. The city is in telegraphic and radio Communication with Hong Kong and from thence to all ports.
Daily communication by steamers is maintained with Hong Kong and Kuang chou. There is an airport at Macau with regular air service between Macau and Hong Kong.
A luminous time signal is located at the observatory. (...). There is a Public Health Service Several hospitals are located in the city.
Texto em inglês in Sailing directions for Western Shores of South China Seas, United States. Defense Mapping Agency. Hydrographic Center, 1966
Publicada por João Botas à(s) 15:20