Hong Kong-to-Macao ferry hijacked
Macao, June 13 - Bandits hijacked a ferry traveling from Macao to Hong Kong shortly after noon Tuesday, fleeing with $1.3 million that was being transported from several banks in the Portuguese-run gambling mecca. Up to five bandits, at least one brandishing a handgun, took three boxes containing the $1.3 million, despite the presence of three security guards, according to police and witness reports. The thieves fired one shot, but none of the 129 passengers or eight crewmen on the jetfoil owned by Far East Hydrofoil Co. Ltd. was injured. None of the passengers or crew was robbed. The hijacking started abruptly near Lantau Island in Hong Kong's New Territories. 'About three gangsters suddenly got up from their seats, telling us to remain in our seats,' said one of the passengers in an interview after the jetfoil had returned to Macao. The man, a Macao resident, declined to give his name. The gangsters fired at least one shot, he said, 'to intimidate us.' Another witness, who also asked not to be identified, said there were five robbers, all in their twenties and one wearing a mask. The jetfoil's captain, Chao Man-wai, 34, said two men brandishing handguns forced their way from into the bridge. At the time the ship was near Guishan Island near the Chinese city of Zhuhai on the way to Hong Kong, which is about 40 miles east of Macau. Just after the ship entered Hong Kong waters, the two robbers told Chao they had a bomb.
'They told me to change course to Qiao Island (near Zhuhai),' Chao said, adding that he had heard two shots. When the jetfoil reached Qiao Island 16 miles north of Macao in the Pearl River estuary, two accomplices were waiting in a speedboat. The gang fled in the speedboat. 'This was a very well-prepared hijacking, certainly based on insider information about those cash boxes being transported by that particular jetfoil to Hong Kong,' said a Macao police source. It was the first hijacking of a jetfoil on the busy Hong Kong-to- Macao route. There are usually no security guards on board and passengers boarding in either Macao or Hong Kong are usually not checked for weapons. Macao Marine and Customs Police are investigating the crime along with authorities from Zhuhai and Hong Kong. Hong Kong police are in charge because the hijacking happened in Hong Kong waters.
in UPI Archives 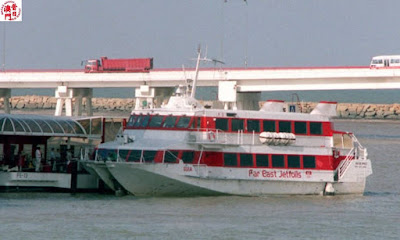