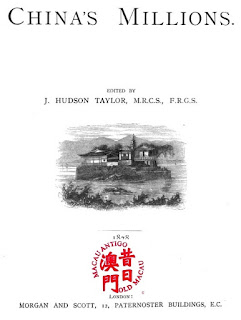 Macao in ancient times a small island off the main land of Hyiang shan in the Kwang tung province has since been united to the coast by a sand bar. This occurence so disgusted the Chinese that in 1573 shortly after the troubles which the settlement of a few Portuguese at Macao involved they built a barrier across the bar with a view to exclude the foreigners from intruding into the interior of the country. The Chinese account of the early Macao Portuguese and of the manner in which the colony was established differs materially from that supplied by the Portuguese writers. It appears that about the beginning of the sixteenth century the Portuguese had attempted to form trading factories at Ningpo and near Swatow. These they were compelled to abandon. In 1552 they are said to have obtained permission from the Chinese Government to erect mat sheds for storing goods at Macao.
This then seems to have been the germ from which the city has grown to its present proportions Fortifications and a church were among the first building works undertaken. Ground rent was not demanded by the Chinese Government until long after the settlement was formed not in fact until 1582. About 1580 Macao was erected into an episcopal see by Gregory III and thirteen bishops have been consecrated in succession to this port. Macao was in its most flourishing condition shortly before the conclusion of the war with Great Britain and the establishment of our colony at Hong kong It was just prior to these events that the best houses were erected and the place gradually assumed its present picturesque appearance. The principal residences front the bay round which runs a broad carriage drive known as the Praya Grande shown in the illustration. 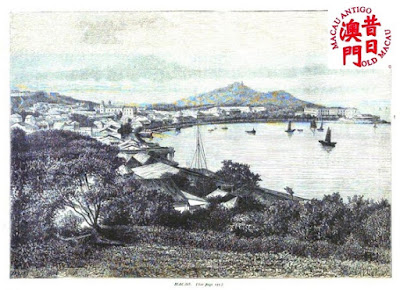 Ilustração incluída neste livro mas retirada da obra "China and its People" de John Thomson
This picture was taken from the hill above Bishop's Bay at the southern extremity of the Praya. The inner harbour is on the north west side of the peninsula and here the oldest part of the town is to be found. A number of narrow dingy lanes lead from the Praya to the main streets in the upper part of the town and here the houses wear an interesting antique appearance greatly marred however by a variety of bright colours with which the owners daub their dwellings alike regardless of symmetry and harmony of combination.
There is now hardly a sign of trade in these once busy streets or indeed of active life in any form save at noon when tawny worshippers hasten in crowds to the cathedral or during the evening promenade on the Praya when the band is playing in the gardens. Influences local social climatic and fusion of races have dealt unkindly with these descendants of the early Portuguese. They suffer greatly by comparison with the more recent arrivals from the parent land being smaller in stature and darker in complexion than either the Portuguese of Europe or the native Chinese. There are of course rare and notable exceptions but one seldom meets with a moderately well formed and attractive countenance. This it must be understood applies to the lower orders of the population and to those only among them who are of mixed blood.
Macao forms a pleasant resort during summer for the residents of Hong kong. A steamer plies daily between the two ports and occupies about four hours in accomplishing the run. A good hotel stands on the Praya Grande and from its verandah one may enjoy the sea breeze and the view of the bay where fleets of fishing boats lie at anchor or sail to and from among the islands. Three times a week travellers may take steamer to Canton and make the tour of that ancient and most interesting city.

There are many picturesque walks in and around Macao and retired sandy bays invite the traveller to taste the luxury of a sea bath. Macao since 1848 has earned an unenviable notoriety for its traffic in coolies. These unfortunate men were shipped to Cuba, Peru and other ports on the South American coast and were many of them kidnapped in the province of Kwangtung or the islands round about. Shut up first in Macao barracoons they were thence packed off in crowded ships inhuman treatment frequently leading to mutiny and massacre or disease and death perhaps bringing to these poor bondsmen a last but grateful relief. That this is no exaggeration the following extract may show. The ship Dea del Mare left Macao in October 1865 bound to Callao. On touching at Tahiti she had only 162 emigrants alive out of 550. The coolie trade of Macao is now under a strict surveillance and is mainly indebted to the enlightened administration of the present governor for this needed reformation. (...)
Artigo publicado na edição de 30 de Setembro de 1878 da revista "China's Million", publicação editada em Inglaterra por J. Hudson Taylor. Existiu entre 1875 e 1950.
Publicada por João Botas à(s) 13:32