"China With A Portuguese Accent": 1ª parte

A 24 de Outubro de 1982, Pamela G. Hollie, correspondente do New York Times (EUA) em Manila (Filipinas) assina um longo artigo no jornla, intitulado "China With A Portuguese Accent".
Macao wears a European mask over its Asian face. For 400 years this small portion of Chinese mainland has been Portugal's outpost in the Far East. It is a Mediterranean city whose stately colonial buildings, Roman Catholic churches and Iberian-based institutions are reminders of Portugal's former glory in Asia.
Once a summer residence of the taipans, the great Chinese traders, Macao was given to Portugal in 1557, supposedly as a reward for clearing the waters of pirates. It became the most prosperous port and trading center in Asia until the British settled Hong Kong in 1841 and the opium wars ended its prosperity. Macao was fought over, but luckily never destroyed. One can walk through buildings, forts and churches built more than three centuries ago and through Chinese temples perhaps two hundred years older.
Nostalgia powers a portion of Macao's tourism, but gambling lines its pockets. There is perhaps nothing more incongruous than to see the neon roulette wheel atop the Lisboa Hotel, where Macao's largest casino is housed, flashing at night or to witness the Macao Grand Prix during the third week in November. Except for that week, when Formula One cars race past dignified monuments to God and mother country, Macao is a place to escape the tensions of Hong Kong. Even the Chinese who live in Macao are less hurried. 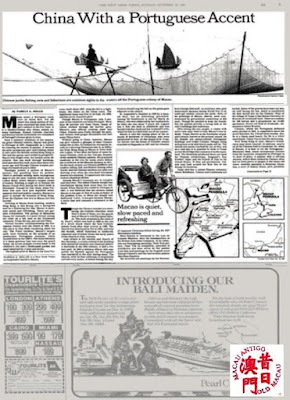 Arriving in Macao from bustling, modern Hong Kong is like diving into a spring-fed pool on a blistering hot day. Macao is quiet, slow paced and refreshing. There are gardens everywhere. The garden of Montanha Russa, for example, is a quiet retreat among tall trees on a hill next to the Protestant cemetery. From the top, you can see China.
Victory Garden, commemorating the Portuguese victory over the Dutch in 1622, is a fine place to stop while wandering about the city. The Flora Gardens, Macao's largest park, were formerly on the grounds of an aristocratic Portuguese mansion, which burned down in the 1920's. The main entrance is a stone gateway that was once the guard house. An arrow-straight avenue leads to the children's zoo and a landscaped garden and pond inhabited by cranes and ducks.
The highest point in Macao is the Guia Fortress, built about 1637. Atop the hill is a lighthouse, the oldest on the China coast. The lighthouse lamp was first lit on Sept. 24, 1865, and has never ceased to glow.
Though Macao is Portuguese, only 3 percent of the residents are from Portugal. More than 95 percent are from China, many of whom walked through the barrier gate, Macao's only official crossing point into China. Chinese pass freely through the gate, and visitors with proper documents can also enter China there.
Without going to China, however, Macao can give visitors a glimpse of what Chinese urban life is like, for behind the European facade is a thriving Chinatown that is as different from Hong Kong as Macao is from modern Lisbon. It has been the home of some famous Chinese, such as Sun Yat-sen, founder of the modern Chinese republic. He practiced medicine in the city for many years before the overthrow of the Manchu dynasty in 1911. On the back streets are Chinese peddlers and traders selling fish and flowers among other wares, and the Chinese markets are open and thriving even when the tree-lined European streets are sleeping. To appreciate the scene, visitors should go on foot.
Among Macao's treasures are its temples and churches. The oldest Chinese temple has inscriptions dating back more than six centuries. When Macao was ceded to Portugal in 1557, it was believed that the settlers called Macao A-ma-gao or Bay of A-ma in honor of the goddess A-ma, to whom the temple was dedicated. Later, A-ma-gao became Macao, a name that still contains a reference to the diety.
Though the Chinese temples are interesting, the Catholic churches, more than a dozen of them, are the guardians of Macao's rich European history. The most awesome is the ruins of St. Paul's, which was built in 1602 on the site of a straw shack where the first Catholic priests lived after their arrival in 1563. The church was destroyed by fire in 1835, and only the facade, which illustrates in medieval, classical and Oriental forms the early years of the church in Asia, remains. 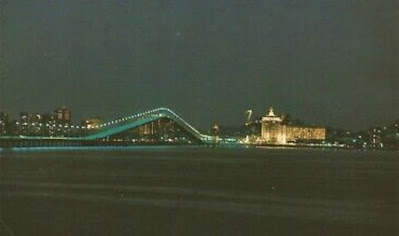 Less ornate is the convent and church of Sao Domingo, a creamcolored stone building with shuttered windows and classical pillars. A barracks in the 19th century, it had a violent past. In 1644 a military officer who supported the Spanish against the Portuguese was murdered at the altar during mass. The church, with its fine collection of exquisitely carved ivory saints, is locked during the day. Visitors should ring the bell on the green gate adjacent to the church.
St. Augustine's, founded in 1586 by a Spanish friar, has an interesting graveyard. Among the headstones is one for Maria de Moura, who was abducted by her husband-to-be when she was about 7 years old. Legend has it that she died in childbirth and was buried with her child and her husband's arm, which he lost in a duel with one of her suitors.
Macao is also the resting place of the remains of hundreds of Christians who were persecuted in Asia. At the chapel of St. Francis Xavier rest the bones of Catholic priests crucified in Nagasaki in 1597 and the remains of Japanese Christians killed during the 1637 Shimabara rebellion.
More history is contained in the Luis de Camoes Museum, once the headquarters of the British East India Company. In its collection are Guangdong paintings, Shek Wan pottery, Poon Yuk Su sculptures, portraits of mandarins and their wives by the painter Lam Qua and paintings by the English artist George Chinnery and the native-born painter Marciano Baptista.
My favorites are paintings by the Russian-born George Smirnoff, an architect who used watercolors because during World War II he could get neither canvas nor paint. Sixty of his paintings of Macao, 1944-45, were commissioned by government authorities at $10 each. Though he painted to keep his family fed, the pastels provide a loving look at the city's buildings and walkways.
Publicada por João Botas à(s) 17:05