"Views in the East; Comprising India, Canton, and the Shores of the Red Sea": Robert Elliot (1833) 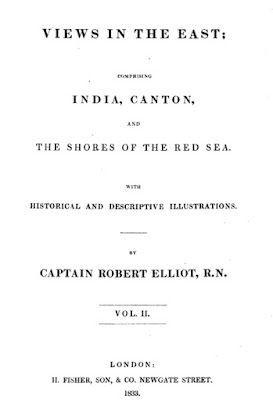 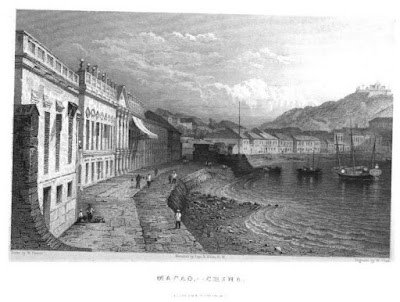 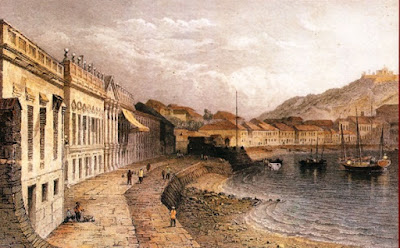 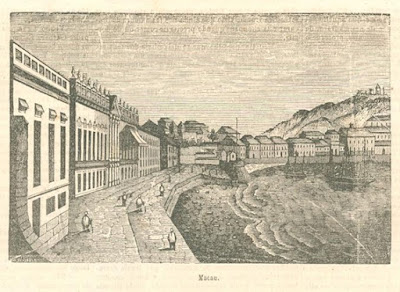 The town is built on both sides and over the hill towards the extremity of the peninsula and it has all the picturesqueness that distinguishes Portuguese and Spanish places. The churches, convents and forts occupy conspicuous places and add greatly to the beauty of the landscape.
This bay in miniature has been compared to the bay of Naples there are certainly points of view that would make a large and beautiful picture the mountainous islands of Lantow and Lintin forming the distance. The view that forms the subject of this plate is taken from nearly the centre of the bay looking in the direction that the Bocca Tigris lies.
The sketch was made from the veranda of a house occupied by Sir James Urmston who was chief of the factory at that time and the larger buildings that appear are the public buildings of the East India Company.
The house of the Portuguese governor is also seen and the Chinese chop or custom house distinguished by the Mandarin pole. There is very little communication between the English and Portuguese families at Macao the distinctive manners and customs of each country being very completely maintained they do not particularly suit each other.
A visit of ceremony to the governor is all that is required and all that usually passes between the English visitors at Macao and the nominal authorities there are frequently invalids from India staying at this place.
In the north east monsoon the weather is cool enough at times to make fires very agreeable throughout the whole day the wind commonly blows fresh and is sharp and piercing during the cold half of the year. The public administration is vested in a senate composed of the bishop the judge and a few of the principal inhabitants but as the Gazetteer remarks the Chinese mandarin is the real governor at Macao.