A Voyage in the 'Sunbeam' 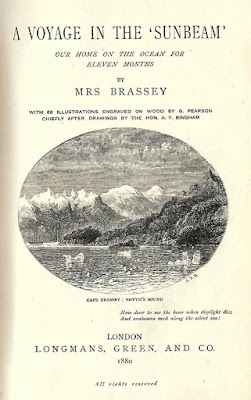 
Baroness Brassey (1839-1887) and her husband Thomas, Baron Brassey (1836-1918), decided to undertake a circumnavigation in the Sunbeam, their 531-ton, three-masted, topsail schooner, with a 350-horsepower steam engine. The Sunbeam embarked on 1 July 1876 with a complement of forty-four comprising the Brasseys and their children, a small party of friends, a professional crew, and a complete domestic staff. Their voyage took them 'across the south Atlantic, through the Strait of Magellan into the Pacific Ocean. Their arrival at Hastings on 27 May 1877 completed the eleven-month voyage. The voyage was to make Annie Brassey a celebrity not because she had been round the world in a luxury yacht, but because she struck exactly the right note in her book about the adventure, using the entries in her journal to describe rambles ashore and daily life afloat.
Excertos:
A viagem rumo a Macau começa em Hong Kong onde apanham a embarcação "Flying Cloud"... Já no território que poucos anos tinha sido bastante afectado por um tufão (1874)  destaque para a visita às ruínas de S. Paulo e ao Jardim e Gruta de Camões.
Tuesday, March 6th