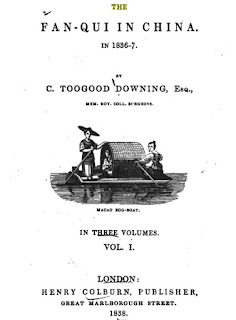 O título deste livro pode parecer estranho mas o autor, Charles Toogood Downing, explica o significado logo na introdução.  "The Fan-Qui in China in 1836/7" foi publicado em 1838 em Londres num total de 3 volumes e tem na capa a ilustração de uma sampana com a legenda "Macao Egg Boat".
"Many persons may be puzzled to understand the meaning of the word Fan Qui. Those who have been to China will comprehend it well enough as they must often have heard it applied to themselves. It literally signifies barbarian wanderer or outlandish demon but having been so long accustomed to the epithet and hearing it so often pronounced we are willing to hope that it is now used without intention to insult and may fairly translated Foreigner. This term of reproach therefore if such it still be expresses in China not only the English but all Europeans, Americans, Parsees, Arabs, Malays and the inhabitants of every other quarter of the globe excepting their own Celestial Empire.
The object of this work is to illustrate in an easy and popular manner the intercourse at present subsisting between these said Fan quis and the children of Hân To take the reader through the Bocca Tigris up to the Provincial City and to show him in a more minute and descriptive manner than has yet been done how matters really stand between them the manner of life of both how the trade is at present conducted and the prospects which exist of a more friendly alliance."
De seguida apresento alguns excertos da obra relativos a Macau - onde o autor, cirurgião, esteve - ficando hospedado no hotel denominado Marickwic Tavern, tido como único hotel inglês no território:
"Macao is first seen over a spit of land which forms the outer boundary of the harbour Before rounding this point you have a full view of the place which bears some resemblance to an amphitheatre and strikes the eye of the stranger as one of surprising beauty The country is broken into small hills which slope down almost to the water's edge. A handsome row of houses is built at the bottom of the small round bay with a parade in front of it embanked with stone against the encroachments of the sea. This is interrupted once or twice by granite quays with steps leading up to the top of the bank. Behind the terrace the houses are built upon the steep sides of the hill and as nearly the whole of them are seen at a little distance they appear jumbled together and placed one on the top of the other. The variety of architecture adds to the singularity as plain and simple gableends are mixed up with the tops of steeples and light and airy summer houses. Where the mass of buildings decreases to form the outskirts or suburbs of the town it is flanked on the right by a very handsome church and beyond that a fort on the top of the cliff. On the left rises a distinct and separate hill on the summit of which is a Portuguese nunnery while beneath it at the extreme end of the semicircle is placed a castle which protects the entrance of the inner harbour. (...)
When the Canton merchants arrive at Macao the appearance of that place is completely altered. A gay and lively season ensues and is continued from that time until a return to the Provincial City is allowed. Those who have resided at the place at this part of the year say that the town is then highly attractive. The Carnival is held by the Portuguese with more than the usual sumptuousness of Catholic ceremonies and rice Christians a term which has very properly been applied to those natives who are converted only during such time as they are living upon the charitable donations of the priests flock in more than ordinary numbers to the churches. Balls routs and masquerades are also given by the gentry and public concerts are occasionally held. On one occasion as I am informed this little town was honoured with the presence of some eminent vocalists from Europe. (...) 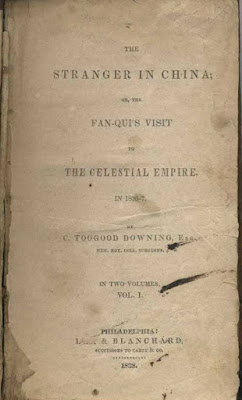 Macao possesses very few things which can interest a stranger after the novelty of seeing so remote a place has worn off You are interested at first by walking up and down the narrow alleys where every thing and every body is different from what you have been accustomed to but you soon tire of that and find it impossile to extend the sphere of your amusements. The markets attract your attention with the great variety of fruits and vegetables exposed for sale for the Chinese are not surpassed by any nation in the cultivation of their gardens. There are no shops here as in Canton with those ingenious wonderful productions of minute art which belong almost exclusively to China and in the examination of which the greater part of the time is occupied by those who visit that place No theatre or exhibition of any kind is in the town at this time of the year so that you soon feel thrown upon your own resources for mental occupation. One thing worth seeing however is the menagerie or zoological garden as we should name it of Mr Beale not having seen it.
I can give no description but I was told that there were among other curiosities some Birds of Paradise alive. You may go all over the world before you may see them again except in their wild state in Sumatra and Borneo as they are perhaps the most delicate of the feathered creation .
Nota: Há uma versão em 2 volumes de 1838 com o título "The Stranger in China: Or, The Fan-qui's Visit to the Celestial Empire in 1836/7". Foi impressa em Filadélfia e é a primeira edição do livro nos EUA.
Publicada por João Botas à(s) 08:58