Michael Rogge visitou Macau em 1950 e 1961. Foram poucos dias de estadia mas que perduraram até aos dias de hoje, nas muitas fotografias tiradas e nos filmes de 16mm. Solicitei a Michael, hoje com 80 anos, um testemunho do que viu e sentiu nessa altura. Aqui fica... Noutros post's mais abaixo já coloquei outras imagens destas duas estadias. As que aqui coloco são do ano de 1950.
This is all I can think of after more than fifty years:
"A year after I arrived as sort of a youngster in Hong Kong in 1949 to work for a Dutch bank there, I was given the opportunity to take part in a support team accompanying the hockey team composed of Dutchmen from the Netherlands community in HK. I had little affinity with hockey but found it an excellent opportunity to visit the then Portugese colony. The more so as we had many Portugese in our bank staff we had friendly relations with. The Dutchmen lost traditionally from their Macau opponents, but we had an opportunity to visit the colony. I rented a bike, a vehicle most Dutchmen go around with in the Netherlands.
I found Macau so relaxed and peaceful. In the evening we went to a casino where bets were lowered from an upper level to a lower level table. We also went to a dancing saloon. At the end of the weekend we returned again to Hong Kong by ferryboat. 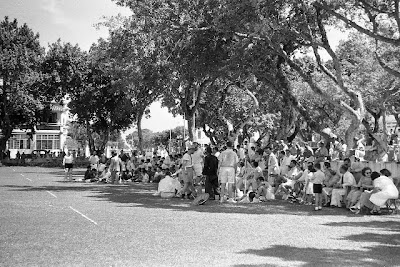 Jogo de hóquei em campo no Tap Seac entre as selecções da Holanda e Macau em 1950
I returned to Macau ten years later in 1961 with linguist Husein Rofé. We stayed for a few days. I was working on a Dutch TV documentary film on HK and Macau. I did not find Macau and Tai Pa changed much. Details of what we saw can be found in the few Macau clips on YouTube. I was staggered when I saw recently a TV item on how Macau looks like now. I wouldn't recognize it anymore and wonder whether I would enjoy it either as before. I'm very pleased with the great interest in the films I took half a century ago, injecting them with a second life." 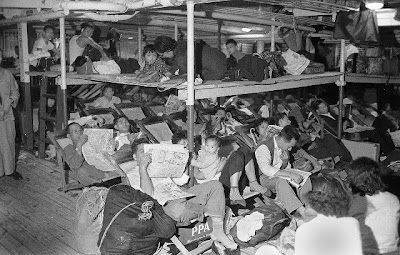