Macao: the holy city; the gemn of the orient earth 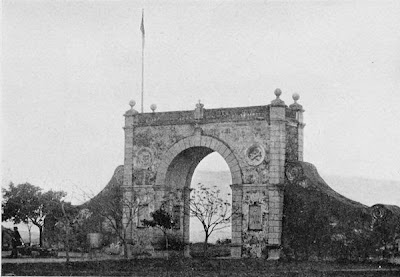 This is the division between Portuguese and Chinese territory. It is some distance along the long isthmus which unites the peninsula of Macao to China. To reach it from the Macao Hotel you pass the Public Gardens at the end of the Praya Grande on your right hand and keep straight on, passing a number of Chinese houses; before quite reaching the end of these houses you turn to the right and then to the left along a boulevard, on your left being the open Campo or a Chinese village, &c. The boulevard ended you pass in front of barracks and then the Governor of Macao's country house set in a garden. You keep on in the same direction, bearing a bit to the left until, the road comes out on the sea. Turn to the left and follow the road till a road, leading directly to the Barrier Gate. down the centre of the isthmus, turns to the right. Soon after passing the Governor's summer residence a road turns to the right which leads to Cacilha's Bay with a pretty little sandy beach.
Above the road and the Bay is the Plague Burying Ground, the graves marked by wooden crosses. By this road one may return to the Praya Grande at a distance of several hundred feet above the sea. But to return to the road which leads to the Barrier. Just before coming in sight of the sea one sees to the left enclosed in a wall, the new Protestant Burying Ground. The old Protestant Cemetery is below the Protestant Chapel, next Camoen's gardens. Below the new cemetery are the courts of the Macao tennis club. Just before reaching the Barrier a short distance is the bathing place, the whole coast line here forming with the sandy beach on the seaward side a magnificent roughly semi-circular bay. Many large fishing stakes are seen with the hovels of their owners perched up amongst the rocks. The whole of Macao seems dominated by forts. To the left is a large one, topping a hill, commanding the Barrier, while to the left are two small ones overlooking the sea and Cacilha's Bay. Once on the road, leading to the Barrier, we see facing us the large gateway which marks the boundary line. As already said the sandy beach is below us on the light with some rough grassy ground between. The muddy shores of the Inner Harbour on the left and on the falling or lower ground between the road and the water, the ever- industrious Chinese market-gardener has brought his skill to bear and the result is beautiful plots of vegetables, plan- ted in symmetrical rows, lovely in their weedless conditions and green freshness to the eyes, but anything but agree- able to the olfactory nerves. Arrived at the gate a guard- house with outbuildings is seen on the left on the Portu- guese side with soldiers. The gate itself is a large arched one with 6 stone tablets let in, bearing different dates such as 22nd August 1849, 22nd August 1870 and 31st October 1871. The remains of an old wall is seen on each side of the gate, though not now continuous. The cause of the Barrier Wall being made in A. D. 1573 was, so it was stated, for the protection of the country (China) and to prevent Chinese children from being kidnapped. A few Chinese soldiers and an officer guarded the door of communications, 6 which was called by the Portuguese Porta do Cerco, so that no stranger might pass the boundary. At first the door was only opened twice a month, then every fifth day for the purpose of selling provisions ; after that it opened at day- light . The tables are now turned ; for this old gate wan destroyed in some of the wars and the present gate is a large foreign structure with a guard house of Portuguese at it. Beyond the Barrier there appears to be a piece of neu- tral ground. The distinction between occidentalism and orientalism; between civilisation and barbarism ; between the European and the Asiatic is noticeable at once : for the well-made Portuguese road is at once changed for the wretched little foot path, meandering hither and thither, rugged and uneven never, properly made, unkept and un- cared for, running through a perfect necropolis of poorer graves; or, at the very best, irregularly paved with long granite slabs unevenly laid and further allowed to sink to all angles. 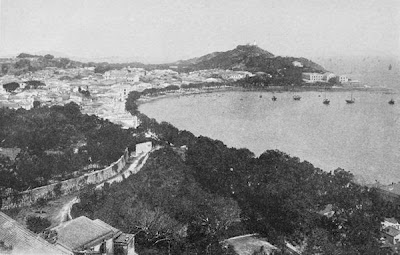 The Praia Grande
One of the most enchanting scenes in Macao is that of this beautiful bay, quiet and graceful sweep of sea wall and rows of houses rising up the gentle slopes and the ancient forts and modern public buildings dotted here and there, while behind all rise the Mountains of Lappa and to the right those beyond the Barrier. All descriptions are imper- fect; some fail from an attempt to liken this beautiful little gem with another world-renowned spot, the Bay of Naples. Let it be acknowledged at once that each is sui generis and attempt no comparison. There is no doubt when coming in from sea towards Naples and trying to detect Macao in Naples one does see a faint resemblence in one of the house- c-lad hills of the latter to Macao's central portion ; but ra- ther let one be content with enjoying the beauties of each and attempt no belittling of the grand proportions of the one or try to greaten the sweet gem-like curves and colour* of dear old Macao. As an instance of what the artistic eye finds in the latter we quote from a short account of Macau appearing in the u Dublin University Magazine " for 1848: "A view of Macao from the sea is exquisitely fine. The semicircular appearance of the shore, which is unencumber- ed and unbroken by wharfs or piers [there are one or two small landing places projecting] and upon which the surge in continually breaking and receding in waves of foam, whereon the sun glitters in thousands of sparling beams, presents a scene of incomparable beauty. The Parade [Praia Grande] which is faced with an embankment of stone, fronts the sea and is about half a mile in length. A row of houses of a large description extends along its length, * * * Home are coloured pink, some pale yellow and others whit.e The houses, with their large windows extending to the ground * * * with curtains. * * convey an idea to the visitor that he has entered a European rather than an Asiatic seaport. This idea becomes still stronger by tin; constant ringing of the church bells and passing and repass- ing of * * priests clad in cassocks and three-cornered hats. But this illusion is quickly dispelled when the eye, turning towards the sea beholds the mumerous sampans and mat-sail boats * * * , or glancing shore wards rests upon figures clad in Chinese costume. " Unfortunately the outer Harbour on which the Praya (Jrande faces is shallow and any large vessels which may call at Macao have to lie some miles from the shore in the offing. The Inner Harbour lying between the Peninsula and the Island of Lappa affords a secure harbour, but, un- fortunately it has been silting up with mud for many years past. Of late years, however, a dredger has improved matters. The Praya on the Inner Harbour presents a great contrast to the other Praya for whereas quiet reigns on the seaward one, the inland one is all bustle ; rows of Chinese vessels are anchored off the shore and boats and sampans line the banks on which coolies are busy loading or unloading cargo to carry into the stores, shops, and wholesale Chinese merchants' places of business on this Menduia Praya or into the back streets.
Publicada por João Botas à(s) 18:29