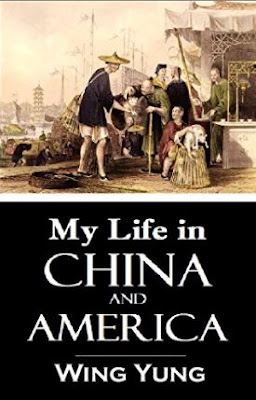 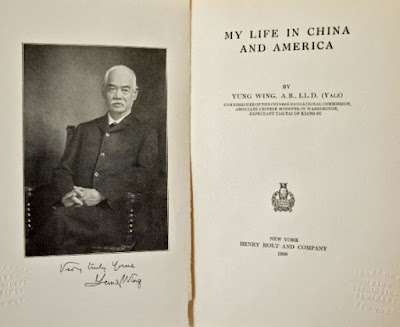 Soon after the gleaning days, all too few, were over, a neighbor of mine who was a printer in the printing office of a Roman Catholic priest happened to be home from Macao on a vacation. He spoke to my mother about the priest wanting to hire a boy in his office who knew enough English to read the numerals correctly, so as to be able to fold and prepare the papers for the binders. My mother said I could do the work. So I was introduced to the priest and a bargain was struck. I returned home to report myself, and a few days later I was in Macao and entered upon my duty as a folder on a salary of $4.50 a month. My board and lodging came to $1.50 - the balance of $3.00 was punctually sent to my mother every month. I did not get rich quickly in this employment, for I had been there but four months when a call for me to quit work came from a quarter I least expected. It had more the sound of heaven in it. It came from a Dr. Benjamin Hobson, a medical missionary in Macao whose hospital was not more than a mile from the printer's office. He sent word that he wanted to see me; that he had been hunting for me for months. I knew Dr. Hobson well, for I saw him a number of times at Mrs. Gutzlaff's. So I called on him. At the outset, I thought he was going to take me in to make a doctor of me, but no, he said he had a promise to fulfill. Mrs. Gutzlaff's last message to him, before she embarked for America with the three blind girls, was to be sure to find out where I was and to put me into the Morrison Education Society School as soon as it was opened for pupils.
“This is what I wanted to see you for,” said Dr. Hobson. "Before you leave your employment and after you get the consent of your mother to let you go to the Morrison School, I would like to have you come to the hospital and stay with me for a short time so that I may become better acquainted with you, before I take you to the Morrison School, which is already opened for pupils, and introduce you to the teacher.”
At the end of the interview, I went home to see my mother who, after some reluctance, gave her consent. I returned to Macao, bade farewell to the priest who, though reticent and reserved, not having said a word to me during all the four months I was in his employ, yet did not find fault with me in my work. I went over to the hospital. Dr. Hobson immediately set me to work with the mortar and pestle, preparing materials for ointments and pills. I used to carry a tray and accompany him in his rounds to visit the patients, in the benevolent work of alleviating their pains and sufferings. I was with him about a couple of months in the hospital work, at the end of which time he took me one day and introduced me to the Rev. Samuel Robins Brown, the teacher of the Morrison Education Society School. (...)
Publicada por João Botas à(s) 11:22