O autor nasceu na Holanda mas foi cedo para os EUA. Esta obra foi escrita quando Hendrik estava a trabalhar na Ásia tendo visitado as cidades que refere. Trata do problema da prostituição e do tráfico de seres humanos, em especial de mulheres e crianças. Um tema para o qual o mundo começava na altura a despertar.
Macau surge no capítulo 4 (p.146-189) - "Brown Girls and Fantan": "There is no question that it harbors in its hidden places the riffraff of the world, the drunken ship masters,the flotsam of the sea, the derelicts, and mora shameless, beautifull, savage woman than any part in the world. It is hell. But to those who whirl in its unending play, it is one haven where there is never a hand raised or a word said against the play of the beastliest emotions that ever blacken the human heart." 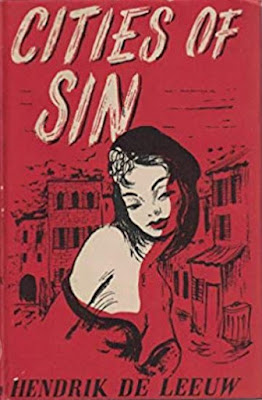 
The procession of women and girls in the Orient rolls to its dark fate under the heavy hand of tradition and custom. As the Yoshiwara is a part of Japan, so is the Purple Mansion a true part of China. Rice and women: those are the staples of the two kingdoms. Turn now to Macao. It is Chinese, too, as may be seen if you will run your eye along the map a few miles from Hongkong. And yet it is a place apart. Its evil is of itself. Its perversions, its strange lusts, its fever of gaming, all those deeds that slay and break thousands of girls in those shadowy dens — all these rise out of the soul of a bastard people, a lascivious creature that runs riot with all the bloods of the East and the West. By some it is regarded as the potent power behind the white slave traffic of the East. There is no question that it harbors in its hidden places the riffraff of the world, the drunken ship masters, the flotsam of the sea, the derelicts, and more shameless, beautiful, savage women than any port in the world. It is a hell. But to those who whirl in its unending play it is the one haven where there is never a hand. raised or a word said against the play of the beastliest emotions that ever blackened the human heart. I went there after Shanghai And as our steamship ap- proached that small peninsula of granite hills and sandy flats on which Macao has been built, I thought of Luis de Camdes, the most renowned of the Portuguese poets, and of the poem that he wrote during his exile, enforced upon him because he exchanged too eager glances with a girl. I thought, too, of the strange fate that may befall a city, how it may pass, as Macao has passed, from a high place in the immense Asiatic world to this nothingness: the last remains of Portugal’s former greatness.


There are, perhaps, 160,000 people there, of which 4,000 are Portuguese and the remainder, except for 500 of other foreign nationality, are Chinese. Once there were thousands more, but the rise of Hongkong stopped the growth of Macao. An enchanting scene. The Praia Grande, a beautiful bay, the graceful sweep of sea wall and rows of houses, of many colors, rising upon the slopes. Ancient forts and modern public buildings stand together. And behind all rise the summits of the Mountains of Lappa. Now frail sampans move near our ship; rusty-sided steamers, with Lascars gazing from their ports move down the bay; a cruiser flying an outlandish flag hauls up its anchor with a deep rattle. I go ashore, A swarm of beggars and ricksha coolies im portune. There is a babel of voices, flashes of color — in dress, in buildings, and in bright eyes — and that mingled odor of humanity and strange foodstuffs, found always where many live together in the Orient. I beckon to a coolie and he pulls me quickly through a part of old Portugal, where, for hundreds of years, merchants and Jesuits have striven for their successes.