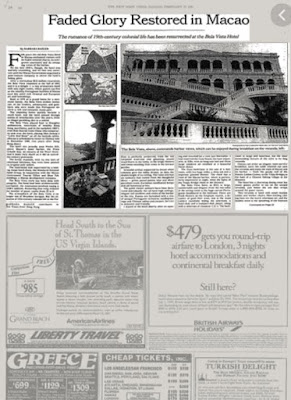 For the two centuries before the British set foot in Asia, the Portuguese colony of Macau was Europe's gateway to China. But with the establishment of Hong Kong a short distance up the Chinese coast, Macau was eclipsed as a trading post and the colony was all but forgotten by its Portuguese masters. It became a haven for spies, arms merchants, gamblers and opium dealers, and a Siberia for second-rate Portuguese civil servants.
Today, however, Macau is experiencing a sudden and dramatic resurgence. After years of neglect, Portugal has recently taken a renewed interest in its last colonial possession. New construction is everywhere, visitors from Hong Kong and the mainland are flocking to it, and the government is on a campaign to preserve the isthmus' 400-year Portuguese heritage before Macau is handed over to China on Dec. 20, 1999.
Central to the Portuguese revival is the recent restoration of the extraordinary Hotel Bela Vista. Located on Penha Hill, overlooking the captivating Praia Grande Bay, the Bela Vista (Portuguese for "beautiful view") is a spectacular Portuguese colonial mansion with a colorful history. Built in 1870, the Bela Vista has been (between stints as a hotel) a Portuguese secondary school, a billet for British civil servants studying Cantonese, a hostel for refugees escaping Japanese occupation of Hong Kong and Shanghai, and a clandestine casino. Thanks to the renovation, the hotel's graying exterior has been replaced with a bright yellow-and-white facade, and on stepping into the lobby you feel as if you are entering the foyer of an old Portuguese family home.
There is no registration counter; the receptionist sits behind a beautiful antique desk under the winding staircase. Relax in a comfortable easy chair as she checks you in, then follow her to one of the hotel's eight rooms or suites, each decorated simply but elegantly in Portuguese style, accented with Oriental antiques. After checking in, take lunch on the Bela Vista's gorgeous veranda. On an average weekday, you'll find Portuguese government officials dining around you (the governor's mansion is a stone's throw away), and on weekends you'll see many foreign expatriates escaping Hong Kong's hectic pace.
After lunch, spend the day exploring Macau's winding back streets, where you can find Chinese antiques for half the price of shops on Hong Kong's Hollywood Road. Peer out at mainland China through the old border gate. Stop by St. Paul's Cathedral (which burned in 1835 during the Opium Wars, leaving nothing but the facade standing), and then visit the wine stores near the Leal Senado, Macau's legislature, where you can buy wonderful Portuguese wines and vintage Ports for a song. 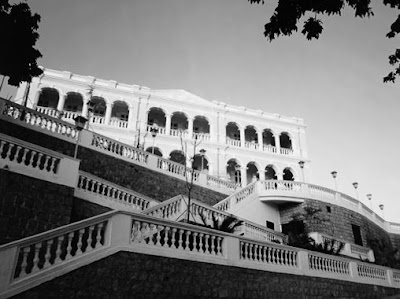 The hotel's kitchen specializes in "Macanese" cuisine, incorporating Chinese and Portuguese culinary traditions. Begin with a plate of traditional Portuguese antipasto or dim sum dumplings filled with spicy Portuguese sausage. For the main course, try the specialty of the house: African Chicken, marinated in coconut milk and grilled to perfection. The wine list offers French and Californian selections, but you're in Macau, so choose from the hotel's extensive offering of Portuguese wines--they're inexpensive and terrific.
Of course, the highlight of the evening will be an after-dinner cigar, enjoyed with a selection from the Bela Vista's considerable cellar of excellent tawny and vintage Ports. We enjoyed a velvety bottle of vintage 1963 Krohn. The Bela Vista's humidor has a small, but high quality, selection of cigars, focusing principally on Cohibas and Davidoffs. Maitre d'hotel Alain Gomis says his dream is to build a cigar room supplied with nothing but the finest Ports and cigars.
For now, sit on the veranda, where at night the lights of the two bridges connecting the Macau peninsula to Taipa Island are strung across the horizon like glowing pearls. Or relax in the bar, which evokes the hotel's colonial feel better than any other room: solid white wood bar, plush green chairs, ceiling fans, tall palms and dark wood tables fitted with large, cigar-friendly Chinese porcelain ashtrays. Or, with cigar in hand, venture out to Macau's legendary casinos, including the gaudy casino at the Hotel Lisboa.
Simply put, the Bela Vista is a romantic reminder of Portugal's colonial past, and today stands as Macau's unquestioned crown jewel--well worth a day's excursion on your next visit to Hong Kong.
Publicada por João Botas à(s) 09:53