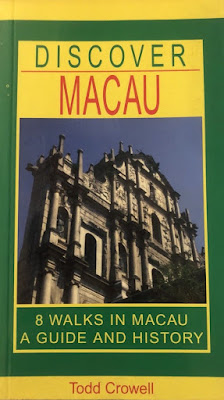 The first time I visited Macau was to find a smuggler. Nothing as exciting as opium, gold or indentured coolies, three Macau exports before it became a gambling emporium, of course. No, my flat mate in Hong Kong wanted to bring his treasured Burmese cats into Hong Kong and he could not abide being separated from them for the six-month quarantine then in effect in the British colony.
With the help of some of his friends in the then Portuguese enclave (not a “colony”, Chinese territory under Portuguese administration) we found the animal smuggler in a shop off of the main street, Avenida de Almeida Ribeira. For a sum he was quite willing to accept the cats and smuggle them into Hong Kong on a junk.
That was the beginning of a 20-year fascination with Hong Kong’s smaller neighbor across the Pearl River Delta. Looking back I am amazed at how much Macau has changed in that time. When I first went to Macau to look for an animal smuggler, the Senate Square, the heart of old Macau, looked decidedly run down. Not today. Cars have been banned and the square has been lovingly restored. Portuguese craftsmen were brought in to make a wavy white pavement out of limestone and basalt that gives it a definite Mediterranean look.
For fourteen years (1987-2001) the australian Todd Crowell worked as a Senior Writer for Asiaweek, the leading English-language newsmagazine, published in Hong Kong by Time Warner. This position gave him a perch from which to observe the tumultuous events of modern history in East Asia, from the Tiananmen Massacre of 1989 to the handover of Hong Kong in 1997. He has published three books: Farewell, My Colony: Last Years in the Life of British Hong Kong (1998); Tokyo: City on the Edge (2001) and Discover Macau: a Guide and History, (2002) and, as a ghost writer, The Story of Legend, about China’s largest computer company. More recently he wrote Explore Macau: A Walking Guide and History.