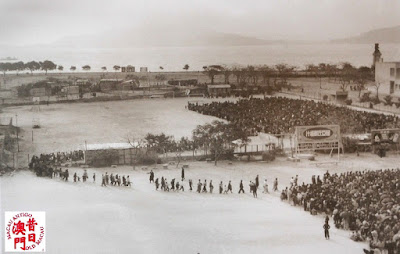 Dear Senator Hart
I refer to your letter of July 25 1962 requesting a report of the refugee situation in the Portugese Province of Macau and a description of Far East refugee program FERP activities Since the occupation of mainland China in 1949 by the Communists.
Macau like Hong Kong has seen an almost continuous influx of refugees escaping from Communist tyranny. The refugee problem in Macau has however taken a different aspect from that in Hong Kong. This difference is due in part to basic differences between the two areas and until recently to the relatively easy movement of people between the two oversea possessions.
The British Colony of Hong Kong is roughly 20 times larger in area and its population of about 3.3 million is 16 times that of Macau. The annual Government revenue for Macau in 1960 was US $4 million while that of Hong Kong for the same year was US $151 million.
Hong Kong depends for its wealth on its industries and commerce while Macau has little of either and derives most of its income from import duties and the granting of concession licenses for gold importation and gambling.
In view of its larger size Hong Kong has offered far greater opportunities to refugees than Macau. This combined with easy movement between the two areas has resulted in a very high proportion of the refugees entering Macau moving onward in a short time to Hong Kong.
Indicative of this is the fact that while the population of Hong Kong has mushroomed since 1949 and includes over 1 million refugees that of Macau has remained fairly static during the same period. Since Hong Kong was the final destination of almost all refugees fleeing Red China the FERP relief efforts were centered there until 1960. Late in 1959 attention was focused on Macau because of the condition of those refugees remaining there instead of proceeding to Hong Kong. These were blind refugees who after fleeing or being forced to leave Communist China were found to be living in great squalor and want on the streets of Macau.
In 1960 the American Foundation for Overseas Blind AFOB with the help of FERP funds began the construction of a center for blind refugees where they could be registered cared for and given vocational training and classes in braille. At about the same time as the AFOB commenced its program in Macau the National Catholic Welfare Conference NCWC started several projects for the relief of other refugees remaining in Macau. These included a nursery and clinic for refugee children a small housing project of 80 cottages and with funds made available by the US contribution to World Refugee Year a community center where vocational training and other services could be made available to refugees. In addition to these projects American surplus agricultural commodities were distributed in Macau by the NCWC and CARE.
During 1960 FERP contracts in the amount of $96,000 were signed for relief projects in Macau. This amounted to nearly 10 percent of the total FERP program for that year. In 1961 increasingly strict controls were placed by the British on travel from Macau culminating in September with the virtual halting of legal immigration to Hong Kong from Macau.
The great influx of refugees into Hong Kong from China in May of 1962 was matched by a proportionate increase for Macau. With the halting of legal migration to Hong Kong this influx has led to an unprecedented increase in the number of refugees staying in Macau Illegal smuggling of refugees from Macau to Hong Kong carried on with great energy and no small profit by small boat owners in both colonies has maintained to a considerable extent the flow of refugees from Macau to Hong Kong and while causing concern to the British authorities has helped to keep the situation in Macau from becoming more serious than it otherwise might have been (...) 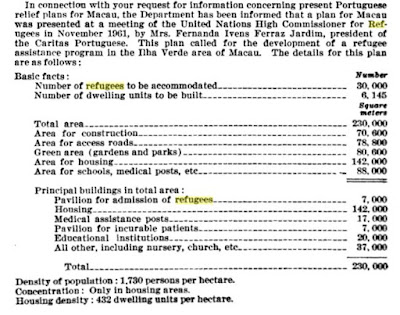 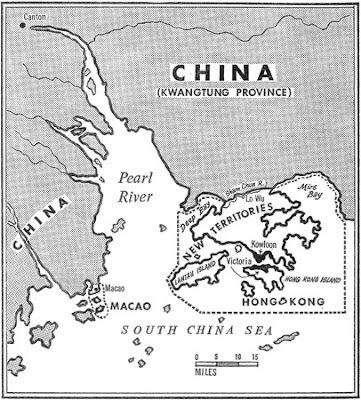 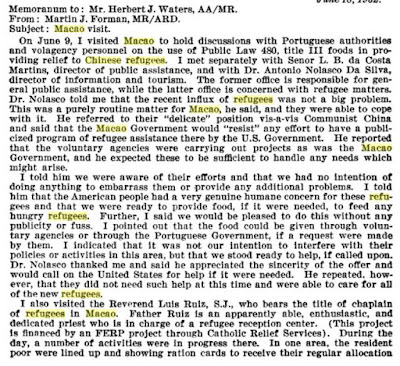