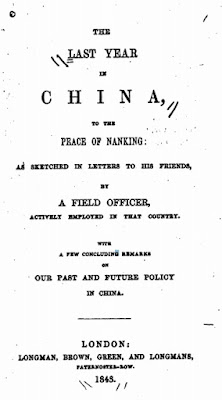 Um livro publicado em 1843 em Londres com o longo título "The Last Year in China, to the peace of Nanking, as sketched in letters to his friends, by a Field Officer, actively employed in that country with a few conclusions and remarks on our past and future policy in China. London: Longman & Brown & Green and Longmans" tem a particularidade de incluir cartas de militares britânicos que participaram na primeira guerra do ópio.

Letter IX. Macao, 25th October, 1841.
I have worn out my feet in walking on the stony, worse-than-Paris pavings of Macao ; so I am resting this morning, and will write you a long letter. Having obtained leave till the end of the month from my floating prison at Hong Kong, for the purpose of going with Captain C. to Macao, we started on the night of the 2Ist instant in a little brig ("The Thistle") placed at C.'s disposal by a Chinese merchant,—the first Chinese owner, I believe, of an English vessel. It had been a very fine brig, and still sails well. In other respects, indeed, all praise of it must be of a retrospective nature. Indeed, on our arrival here, we heard it had been sold as a condemned vessel. At this season of the year the wind is usually very favourable for going to Macao from Hong Kong; and on going on board we expected to awake next morning anchored at our destination. We found our selves, however, only about eight miles from Hong Kong, having been becalmed noarly all the night. Luckily, though not expecting to require it, we had a small stock of provisions on board; and at half past eight we had just commenced attacking a good breakfast on deck, when a squall came on suddenly. The not half-eaten breakfast was obliged to be sent away; and the squall increasing to a gale, a prospect of misery was before us. The sails of the brig were rotten, the ropes worse, and the vessel itself exceedingly likely to leak.
Fortunately we had on board the captain of the "Sulimany  transport, to whom C, at my request, had given a passage to Macao. He is (besides being a gentlemanly well-connected young man) known to be a very good seaman. He also knew - what the rest of us did not - of the condemnation of the vessel; and, besides, saw that we were very likely to lose sails and spars, if not masts. Meantime we cracked along at a great rate among the islands to the south of the large island Lantou; from the valleys of which last puffs occasionally came down with the force of hurricanes. (...)
Our little brig, drawing but a few feet of water, was enabled to anchor at the distance of only half a mile from the landing place at Macao, instead of four or five miles off among the shipping in this dangerous roadstead. The town, which is unlike every thing I had seen before, has rather an imposing appearance from the harbour, which appearance is no doubt strengthened by the Portuguese forts that com mand the latter. Macao is, politically speaking, a very curious place. The Portuguese have a great many privileges; they have their own governor and a garrison of some 400 men, and rule themselves.
I saw yesterday the Portuguese army, the numerous guards deducted, returning from mass at the great church. The men have by no means a despicable appearance. They are in general as dark as Mussulmen in the Carnatic: and indeed I was told that some of the recruits were actually Mussulmen. The Portuguese fair ones (or rather brown ones) seem never to stir abroad ; though they may be seen in the balconies of their houses in the cool of the evening. If you look up, they get behind the Venetians, to pretend to hide themselves, and to take a peep at you. I have not yet seen a pretty face among them. Indeed, pretty ladies seldom hide themselves: to be seen is with them even a greater pleasure than to see. The venerable fathers of the convent, with their cocked or (as C calls them) cockedup hats and long black gowns, and a lot of hooded nuns, may be seen abroad occasionally, the latter doubtless on their way to and from mass. Among these last I have seen one, or perhaps two, pretty pale faces, not more.
The English merchants here, though hospitable and friendly, cannot enjoy much society. A recent importation of English ladies has swelled the amount of these links of social hap piness to twelve, and another shortly expected will complete the baker's dozen. It is an astonishing fact (considering they are English) that these ladies are not all at daggers drawn with one another. Indeed, as the Portuguese arc too poor to associate much with the English, our fair countrywomen are obliged to keep on tolerable terms with each other - a sod and cruel necessity, no doubt. The English merchants feel very unsettled while awaiting the decision of the home govern ment respecting the permanent occupation of Hong Kong. The majority are, I think, in favour of the latter place as the seat, or rather depot, of their trade. On the other hand, some, considering the vicinity of Macao to the Canton river, dwell on the advantages of adhering to the established order of things. The fact is, the merchants are splendidly housed here, though only as renters: otherwise the superior advantages of living under their own government, and having such a harbour as that of Hong Kong, would be unanswerable arguments in favour of the latter place. (...) 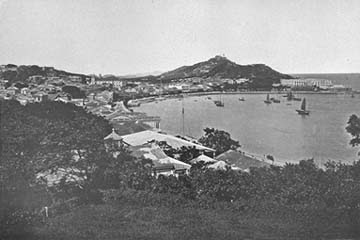 Letter X. Macao, 28th Oct 1841.
The Portuguese government has the right to try Chinese as well as Portuguese and Englishmen, and has more power than I had been led to suppose by books alluding to the subject. The Chinese controlling power is a very curious one, if I am to believe what I am told here. When the Mandarins are dissatisfied with any proceedings of the Portuguese govern ment, they issue orders to their people not to work for the Portuguese. This strike, it is said, gives the Mandarins the victory on such occasions. But as far as I can learn, collisions of that sort seldom occur nowadays. The English merchants only rent houses here : but since they have been forced to retire from Canton and to reside in this place, Macao has risen from an almost ruined to a very flourish ing condition. The Portuguese as well as Chinese thrive on British wealth and industry; and both will suffer when Macao is abandoned for Hong Kong. The English merchants in China are very hospitable, and keep up the character of merchant princes: the houses they rent here are very large, and elegantly furnished, at least those in which married ladies are found. There are no very fine buildings, architecturally speak ing, except the ruins of the ancient San Paulo church; of which, however, the front alone is standing. It was once the finest Christian church in the East. Yesterday morning I went with Dr. L to see the Casa gardens  - one of the lions of this place. It is formed out of what was once the gardens of the Dutch and English factories. It is small, and in the European style. It afforded, however, no shelter from the midday sun, and yesterday, though so late in the year, the thermometer, in the shade, stood at 8I°. We were broiled, in spite of a thin silk umbrella. The garden is such a one as almost every English or German town can boast of. The want of shade is attributed to the devas tations of the typhoons, which perform here the same part as hurricanes in the West Indies, to which the leanness of the horses used to be ascribed.
The cave of Camoens - that in which he composed a part of the Lusiad - is naturally a picturesque object, formed by three irregular gigantic stone blocks, such as Homer's deities might have pelted each other with. One of these blocks seems to have fallen on the two others, and thus formed a cool cave with two entrances. The Portuguese, with their devices and plaster and ornaments, have spoiled its sylvan graces. To crown their absurdity, they have clapped a round summer-house on the top. Yesterday evening Mr. L took us to see Mr. Beale's aviary; and I can assure you even a matter in ornithology would have been enraptured. "We saw splendid gold and elegant Argus pheasants, and a magnificent bird of Paradise, a bird very seldom seen alive. I was most delighted with some dear little Mandarin ducks, whose wings, backs, breasts, and heads arc of different, yet sober quakcrlike colours. Of the fine arts, painting is enthroned at Macao: our countryman Cliinncry is supposed to be the greatest of Eastern painters. He almost worships Sir Ewe became good friends. He certainly paints and draws beautifully; but I cannot say whe ther he takes good likenesses. I read in a certain Indian journal the description of some scenery which was said to be " worthy of the pen of a Byron and the pencil of a Cliinncry," ajuxta-position of names which rather astonishes an Englishman. Chinese artists abound. Some - the pupils of Chinnery - are very respectable performers. Lunquah is the first; but he is gone to Canton. They take accurate likenesses, and will make copies of pointings to resemble the originals to such a degree that none but an artist can tell the difference. They don't know how to flatter yet; but English dollars will one day teach them that profitable art.
A lady at Macao was having her portrait drawn. As the work proceeded, she expressed her strong dissatisfaction at the performance. "Spose," said the painter,"you smile a little: he lookee better." 'Twas vain; for when the "pigeon" was done, the indignation of the fair one was so great and so disagreeably expressed, that the irritated artist naively exclaimed, "If handsome face no got, how handsome face can make? "English artists could teach him. (...)
Shopping in Macao is a laborious operation. Curiosities are easily procured; not so European or Eastern articles of clothing and comfort. The Chinese almost invariably take less than they ask of a foreigner, but always more than is fair. If you are polite, they are insolent; if you are cold and contemptuous, they are civil and obliging. Those, however, who know Englishmen, will generally behave respectfully, and may be civilly treated. (...)
In walking about Macao, strangers are usually armed with good aticks, as it is considered im prudent to be out late without some means of self-defence. C was once saved from being thrashed and robbed at Macao by the energetic use of his Penang lawyer, - an excellent ad vocate, who got him off safe both in limbs and pocket, and asked no fee. A Penang lawyer is made of the root of a tree that grows in the pretty island whose name it bears; and it is found of greater use in squabbles than an English lawyer - however little of a stick the latter may be. (...)