"For Refugees From Vietnam, a Catch-22 in Macao"

The continuing arrival of large numbers of Vietnamese refugees in Hong Kong and in this Portuguese colony is not limited to people from the south of Vietnam. Most of the refugees here and more than one-fifth of those in Hong Kong come from the north, which has been under Communist rule since 1954. Two distinct groups are prominent among those fleeing from the north: Roman Catholics and ethnic Chinese. Both groups benefit from the indulgent attitude of China, which grants informal transit assistance to all who flee Vietnam. At the height of Vietnam's persecution of its Chinese minority, in 1978 and 1979, China accepted 263,000 ethnic Chinese as refugees and installed them on large state farms in southern China. 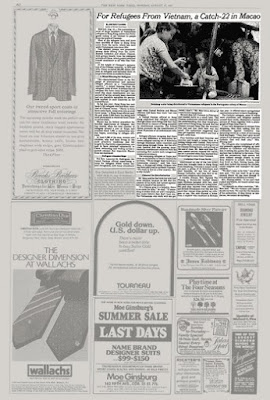 A Mixed Blessing for Refugees
This characterized China in the language of international and national refugee officials as a ''resettlement country,'' a mixed blessing from the refugees' point of view. It means that all refugees who have come through China since this mass resettlement are suspected of having already been resettled and are therefore ineligible for permanent asylum in such countries as the United States.
So far this year, Hong Kong has sent back 2,725 refugees who had been resettled on Chinese farms. ''Thirty to forty have come back, some even two or even three times,'' a Hong Kong official said. He said about 2,900 more are being held until permission is received from China to return them. Macao has no formal procedure for forcible repatriation of refugees. But last month, when the total number of refugees around a pier at Taipa had reached about 7,000, a mysterious exodus began, according to refugee officials. At least 3,000 of the men, women and children, who had been living in the most primitive conditions and fed largely by charitable organizations, are said to have returned voluntarily to China, swimming and wading across a narrow channel that separates Macao from the mainland.
Refugees Abandon Hope
The Rev. Lancelot M. Rodrigues, the United Nations official supervising a camp for refugees whose status has been recognized, said many abandoned hope when United Nations and Macao officials told them they were ''not real refugees.'' A United Nations official in Hong Kong confirmed that refugees coming through China were being told that they had almost no chance of being accepted by resettlement countries. The United States accounts for the resettlement of about 70 percent of all Indochinese refugees. Refugee officials recognize that there is no real difference in motivation between refugees coming out of Indochina through Southeast Asian countries and those going through China. But the officials contend that the growing impatience in resettlement countries with the unceasing flow makes such categorical measures necessary. The remaining refugees at Taipa pier show no inclination to return voluntarily to China. ''We no longer want to live in a Communist country,'' said Yen Cam Mau, a 35-year-old ethnic Chinese who was born and lived in northern Vietnam. ''We want to live in a free country, that is why we left.''
Chinese Cite Discrimination
Mr. Mau said he fled with his wife and three children because he felt that the country of his birth had turned against him as a result of his ancestry. ''If a Chinese goes to a hospital, there is no room for him,'' he said. ''If something is stolen from me and I complain, they make believe they don't hear me. The Vietnamese who work with me get raises, I don't.'' Mr. Mau was a driver of construction equipment. He said they left Vietnam in February and headed north in a small boat. The Chinese authorities admitted them with the understanding that they would proceed toward Hong Kong, he said. But the Chinese warned them that the weather was bad and that their boat was too small. The authorities suggested that they get together with others and buy a larger, safer boat. Four families sold their bicycles and watches and bought a larger boat in a fishing village near Canton. They rowed for three days, occasionally being towed by Chinese fishing boats, and arrived at the end of June. Mr. Mau said that Chinese coastal patrols stopped the vessel, but let it proceed when they learned that the passengers came from Vietnam.
Catholics Flee From North
Interviewed on one of the two small boats that brought them to Hong Kong from Haiphong, Vietnam's major northern port, a group of 45 fishermen and their families, all but two of them Roman Catholics, said they fled to escape from religious discrimination. A voluble woman, Mrs. Nguyen Thi Phuong, a 35-year-old mother whose eight children escaped with her, said they had wanted to leave for a long time. She said they learned from American and British broadcasts over the last two years that rescue ships picked up refugees at sea. She also showed a letter from a nephew who resettled in Britain last year. It offered exact navigational instructions on how to leave Haiphong. The Catholic refugees, most of whom wore crucifixes and religious medals around their necks, displayed a framed picture of Jesus together with a photograph of Pope John Paul II. It was very dangerous to escape from Haiphong, they said, adding that discrimination against Catholics was becoming worse at a time of increasing food shortages. ''They don't give us our ration of rice because they say if you are Catholic God will feed you,'' Mrs. Phuong said.
The refugees also complained of official pressure against bringing up their children as Catholics and discrimination in setting the quotas that each fishing boat has to deliver to the state. They said the excessively high quotas left them without enough money to send their children to school. Even though they lived on their fishing boats, they said, they lacked the money for clothes, school supplies and transport for their children.
''We don't want to be rich,'' one of the men said. ''We just want to go to any country where we can earn enough to live and send our children to school.'' Mrs. Phuong added, ''If we can't find a place anywhere, we would rather stay here and die.'' ''All depends on other countries,'' Mr. Mau said. ''We are victims and cannot decide our fate. We wait for the decision of the authorities. If they throw us into the sea, we cannot do anything.''