The Junks and Sampans of the Yangtze 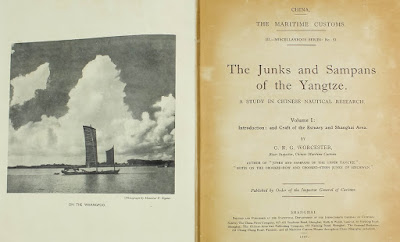 The Junks and Sampans of the Yangtze is the definitive work on the river craft of China, lavishly illustrated with photographs, diagrams and maps. Eager to record folk customs before they disappeared forever, Worcester recorded over 250 types of river craft, noting that “some of the finest types, as a result of the last few difficult years, have gone for ever, particularly the many varieties of deep-draught salt-junks and, of course, the lorchas, and many others.” A shorter version of Volume I was first published in 1940 under the same name; this 1947 edition was published as part of a series on Chinese Maritime Customs. Another edition was published in 1971 by Naval Institute Press.
Publicada por João Botas à(s) 08:18