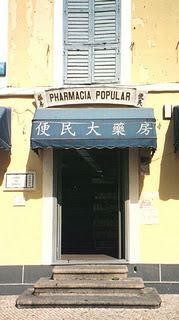 In 1895, a Portuguese man opened Macao’s first Western pharmacy, housing it in a two-storey European building in the centre of the city. More than a century later, the shop is still serving customers and is part of one of the city’s biggest providers of medical services. The Farmacia Popular (FP) stands in a 400-year-old building close to the water fountain and the Central Post Office in the historic centre of Macao, part of the World Heritage Site declared by UNESCO in 2005. This location and the service it has given over the last 116 years have earned it a place in the hearts of Macao people. It has ten branches across the city, in a market that has exploded over the last five years. (...)
The first shop was opened in 1895 by Henrique Nolasco da Silva, the son of Pedro and a member of one of the most prominent families in Macao. Born in 1842, Pedro married an English woman in 1868 and went on to become president of Leal Senado (Municipal Council). He was a member of the Government Council, chairman of the Holy House of Macao, and founded the Commercial School. Henrique trained as a pharmacist in the Portuguese colony of Goa and returned to Macao to open the business. Initially, most customers were the expatriate community. The local population relied instead on Chinese doctors and Chinese medicine. Gradually, Western drugs were accepted by the Chinese population, and the market grew. FP was the first pharmacy in Macao to separate treatment from drugs. Patients consulted a doctor who prescribed medicine which they bought at the pharmacy; its staff sold them the medicine and explained how they should use it and the possible side effects. Photographs of this early period show the Western pharmacists in white coats and the Chinese staff in long dark gowns. The shop received certifications from the Portuguese government and the Chinese Chamber of Commerce. Henrique died in 1971.
For decades, it was a family business that changed little; its employees stayed there for their whole working life. In 1983, the Novel group of Hong Kong bought a 90-per-cent share of the business, leaving the remaining 10 per cent in the hands of the founding family. The family gave up the management of FP and later sold its stake. Novel brought in a more modern style of management and began to expand. FP opened a second store in 1990, with a Macanese pharmacist who had been trained in Portugal. The next ones opened in 1996 and 1997 and now total ten. It is also one of the biggest wholesalers of drugs in Macao, with the government one of its major clients. The pharmacy business in the city has exploded, with the rapid rise in population and flood of visitors from the mainland after the post-handover government opened the gaming sector to new licencees. (...) Ng said that the pharmaceutical market in Macao was very big and that there was a lack of trained talent, in this sector as in others. “We plan to open two more branches this year. We grow slowly and cautiously and not only for the money. We have a strong sense of responsibility to the customers. We are not the biggest firm but enjoy the greatest public confidence.” (...)

Ng said that the firm would keep the original building as a branch. “It is a World Heritage site, in a 400-year-old building. It has had three major renovations – in the 1980s and the 1990s. It has great historical meaning: a symbol of the East and the West.” The two-storey building is painted yellow, with window shutters on the second floor. It occupies a prime site close to the square with the water fountain in the heart of the city. It sells Chinese and Western medicines, medical instruments and health and skincare products. Opposite is one of its competitors – Watsons, a big chain based in Hong Kong.
In 1990, the group opened its first clinic offering both Western and Chinese medicine. Later it opened a second in Taipa. Each clinic has 10–20 doctors, including those from Hong Kong, the mainland and returnees from abroad, and offer a range of specialties. Most of the clients are corporations, who sign an agreement with the group to treat their employees. Henrique, the grandson of the founder, works in the Macao Monetary Authority. “When I walk past the pharmacy, I feel a great sense of pride, of my grandfather’s contribution to Macao,” he said.
Article (excerpts) by Mark O'Neil ("Flourishing pharmacy") - Macao Magazine 2011 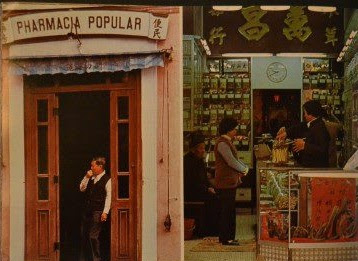