George Chinnery's Portrait of Thomas Colledge in His Study. Engraving, about 1835
Dr. Thomas Colledge was one of the first Western medical men to practice on Chinese patients. While an employee of the British East India Company, he set up an ophthalmology clinic/hospital in 1827 in Macau, specializing in the removal of cataracts, and treated over 4000 patients during his time there. In 1833 Colledge married Caroline Shillaber, a beautiful young woman from an American family living in Macao. Colledge left Macao for England in April, 1838. 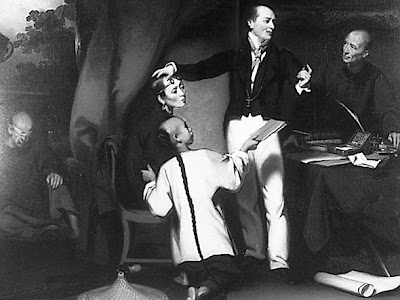 One of the first Western-trained physicians to go to China was an Englishman, Thomas Richardson Colledge, MD (1796-1879). After completing his medical education at St Thomas's Hospital in London, Colledge entered the service of the East India Company, the powerful mercantile firm. He practiced medicine in China, at Macao and Canton. He was employed initially by the East India Company, and later by the British government as a surgeon to the consulate at Canton. He also offered his services gratis to the native population. Very few Western-trained physicians had ever treated the Chinese before. In 1827 he created, in Macao, the first institution to offer Chinese people Western medical care. Known as Colledge's Ophthalmic Hospital, it was available for all types of disease but concentrated on ocular problems. Quickly, Dr Colledge became very busy and treated about 4000 patients throughout the next few years.
Publicada por João Botas à(s) 13:22