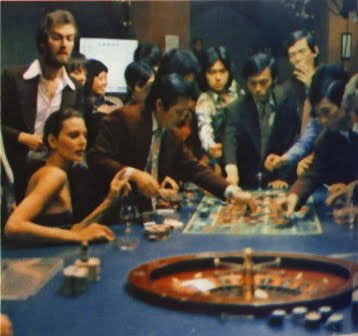 Macau has been at the heart of travel in Asia for centuries. For more than 400 years, travellers have been converging on the city in search of adventure, romance, fame and fortune.Today's tourists might have little in common with the swaggering traders and fervent missionaries of the past, but they will find Macau is still an exciting meeting point of cultures, customs and traditions. This blend of East and West, just 50 minutes by jetfoil across the Pearl River estuary from Hongkong, offers something different at every turn.
Snuggled into the grey-green hills of the South China coast, Macau has vistas of sparkling sea, gentle hills and rugged little island on all sides. It is low-rise, although the skyline is creeping high under the pressures of a growing population and expanding light industry.
However, its winding cobble-stone streets are shaded by avenues of ancient banyan trees, many of them planted more than a century ago when traffic was less congested and carriages and sedan-chairs were the main modes of transport.
Many of its buildings preserve the grace and gentility of these days. The columns and arches, the graceful iron-work grills, and the pastelcoloured plaster work grace the streets with a distinctive Iberian warmth and elegance. Macau can also be a totally Oriental city, for by far the greater part of its population of some 300,000 people are Chinese. 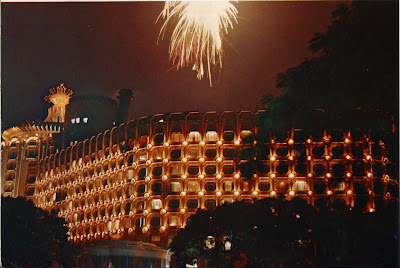 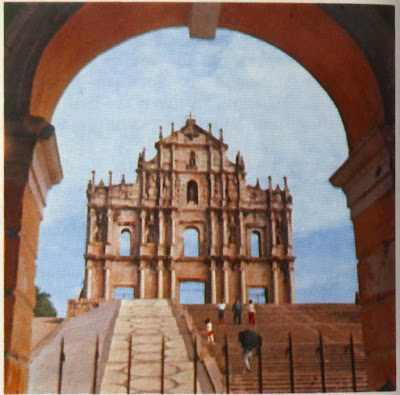 Along the Inner Harbour, where the Rua do Almirante Sergio becomes the Rua das Lorchas, it is alive with the bustle, sights and sounds of a China coast port of old. Massive fishing junks cram into the harbour, where a line of markers indicates the border between Macau and China, bringing their catches of deep-sea fish to market or seeking shelter from the ferocity of summer typhoons. They also gather to celebrate major festivals, such as the coming of the Lunar New Year and the Feast of Tin Hau,the patron goddess of the sea.
A cruise through the close-packed ranks of moored craft by luxury Macau Watertours junk is a chance to see close-up how these veteran seafaring people live. Small sampans crowded with domestic goods - literally floating grocery stores and smallgoods shops-wend their way between the craft, where whole families are at work on fishing nets and lines, or repair work on the junks, or just taking a brief rest before returning to their labours far out in the South China Sea. 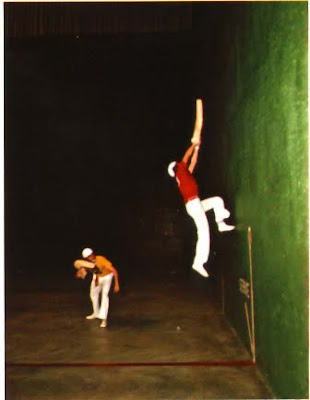 There is a timelessness about the scene that is belied only by the occasional television aerial or blaring transistor radio.
Macau is also as modern as the flashing neon signs at the Lisboa Casino entrance, or the spectacular Palacio de Pelota Basca, or the superfast jetfoils that take you there.
Those who have the time for a more leisurely crossing can take one of several modern ferries; the threehour journey provides an endlessly changing seascape of islands and ships and fishing craft.
They also provide a taste of the casino's thrills, for there is a mini-casino on board equipped with a range of "one-armed bandits"(more appropriately known colloquially, perhaps, as "hungry tigers").
Or visitors to Macau can travel by one of the fleet of 17 hydrofoils which maintain a half-hourly service during the daylight hours. The journey takes about 75 minutes. 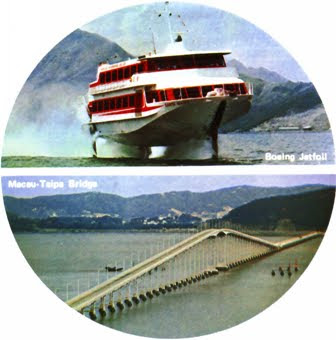 and add comfort to speed. The big craft "fly" on underwater wings and are powered by a jet engine, giving a fast, stable ride.
Right at the ferry terminal, in the shadow of historic Guia Light - the first lighthouse on the China coast - is the massive Palacio de Pelota Basca, housing the jai alai fronton, a casino, and a first-class restaurant. Jai alai, a pastime invented by the Basques of northern Spain, is the world's fastest ball game and is played by a team of experts brought from Spain. Totalisator betting on the games adds an extra thrill to the eye-dazzling sport.
Also, on an average of twice a week, there are greyhound races at the Canidrome. Most of the dogs come from Australia, as do some of the trainers.
But it is the luxurious Hotel Lisboa's casino complex that draws the biggest crowds. This is where the real excitement is generated, as the cosmopolitan crowds pit their skills against the hazards of Chance in a range of games that encompasses roulette, baccarat, blackjack, craps, keno, boule, and the traditional Chinese games of fan-tan, big-andsmall, and pai kau (a kind of dominoes). There is also bingo once a week.
Dining in Macau is a rich experience. Excellent Portuguese menus can be found at the Pousada, Solmar, Lisboa and other restaurants and some of the dishes have been adapted to give them a special Macau flavour and spice. Seafood is superb with the king prawns and sole, cooked in various mouth watering ways, being especially popular. There are a number of top class Chinese restaurants with long menus. A very popular Macau dish is pigeon cooked in port wine. And of course with all the meals there are the delicious wines of Portugal - the delightfully light semisparkling Vino Verdes and the smooth full bodied Daos. Portugese brandy, aromatic and slightly sweet, sits well on the stomach after a meal in Macau. 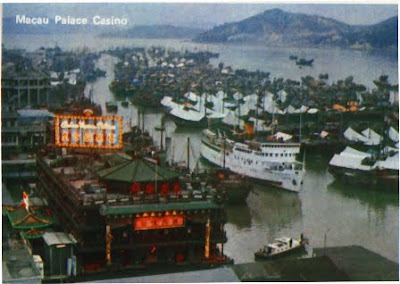 There is much more to Macau than food, wine and gambling, however, for this is a city that breathes of history and legend.
Macau was founded about 1557 (the exact date is not known) when the Portuguese Empire was rapidly expanding in the wake of epic voyages of discovery that expanded the then-known world to include India, China and Japan, the spice islands of the East Indies, Africa and South America.
Trade and the Cross were the motivating forces for these great journeys, and a chain of famous cities grew up to support and sustain the links that stretched from Lisbon round the Cape of Good Hope to Goa, Malacca, Macau and Nagasaki in Japan.
As Macau became firmly established, it grew rapidly into one of the world's great commercial capitals, with its trade links stretching north to Japan, east to the Philippines, Mexico and the Spanish colonies in the New World, southeast to the Celebes and Timor, and south to Malacca, Goa and the African colonies.
The city's churches record a separate but closely-linked history, for Macau was Christianity's gate to all of China and Japan.
Among the most rewarding to visit are the ruins of St Paul's basilica, destroyed by fire during a fierce typhoon in 1835. Its massive stone facade was designed by an Italian priest and built largely by Japanese Christians who had been exiled from their homeland.
Sao Domingos, near the Leal Senado building in the city's centre, was once the scene of a pitched battle between the clergy and the army, and in another memorable outburst of violence a fleeing officer was cut down and killed while seeking sanctuary between the High Altar and a priest who was conducting a Mass.
Sao Agostinho is another historic church in the classic Iberian rococco style, while Sao Laurenco retains its position as the "society" church, and Sao Jose houses a relic of St Francis Xavier who died near Macau on one of his Eastern journeys.
Along with the Church, the army played a vital role in Macau's history and there are several famous forts still in existence.
Santiago de Barra once guarded the entrance to the Inner Harbour, while Guia's guns repelled a force of Dutch invaders. Monte, overlooking St Paul's, was built by the Jesuits as a stronghold but they were expelled by an ambitious governor who had been invited to dine there one evening.
Christianity thrived alongside the traditional Chinese religions, and a number of interesting temples are to be found in quiet byways round the city.
By far the oldest is the temple dedicated to A-Ma, the goddess of the sea (also known as Tin Hau). It was near there that the Portuguese first set foot on the peninsular and gave the new city its name. (By a series of changes A-Ma-Kok eventually became Macau. In fact, the city's proper name,as granted by the IndoPortuguese authorities in 1586 is Cidade do Nome de Deos na China - the City of the Name of God in China.)
Almost as old as the A-Ma Temple is that of Kun Iam, named for the Queen of Heaven, and dating back to late Ming Dynasty times.
The Lin Fong Temple is one of the best examples of Chinese-style formal architecture in the city. It was formerly used as the home of the Mandarin who visited the city from Canton to deal with any problems encountered by the Chinese population.
Among other buildings that record Macau's past are the Luis de Camoes Museum, one of Asia's most interesting small museums; the Leal Senado, which houses the National Library; and the Santa Casa Misericordia, a four-centuries old charitable organisation that still cares for the under-privileged.
All this, and more, is crammed into a space that totals less than 10 square miles in area.
Macau, officially a territory under Portuguese administration and having its own elected Legislative Assembly with control over internal affairs, comprises the peninsular where the city was founded and grew, and two islands, Taipa and Coloane.
An elegant harbour bridge links the city to Taipa, and a causeway gives road access from that island to Coloane.
The quiet rural charm of these islands might soon have to give way to give way to development projects, however, for the Macau Government plans its major expansion of facilities in these areas.
Among the projects planned for Coloane are a container transshipment wharf and industrial town, and a self-contained resort at Hac Sa(Black Sand)Beach.When completed in five years time, this resort will comprise a 250-room hotel, 18 hole golf course, country club, amusements centre, swimming pool and boat marina.
Tourism is the territory's major industry, and under the guidance of a youthful Information and Tourism Department,facilities are being upgraded and expanded.
In 1976, a total of 2.5 million people (some 2 million of them from Hong Kong) visited Macau.
Tourism officials are confident this figure will grow steadily (the first four months of 1977 indicate a healthy 20 per cent increase over the record 1976 figures) through its campaigns to include Macau in the itineraries of more travellers to the region.
Macau has seen a number of boom periods in its 400 years - it is confident that the current tourism boom, together with an expanding economy, promises even greater rewards for its people.
Macau : ancient meeting of East & West in "Hong Kong Tatler", Hong Kong, 1 (6) Aug. 1977.
Publicada por João Botas à(s) 18:18