The city is built on the side of a hill 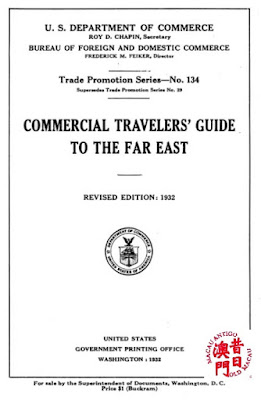 Macao
A Portuguese colony on a small rocky peninsula extending southwest from the rest of the island of Heungshan in Kwangtung Province Forty miles from Hong Kong 88 miles from Canton and 948 miles from Shanghai.
Population 84 000 of whom 4 000 are of Portuguese extraction and about 300 other Europeans and Americans.
Macao is a free port and prior to the cession of Hong Kong to Great Britain in 1842 was the only open port in China.With the rise of Hong Kong and the opening of Canton to foreign trade Macao has lost its important position in the shipping world.
In an effort to retrieve its former position the Macao Government has recently added many improvements to the harbor including breakwaters piers and warehouses. It is now best known however as the Monte Carlo of the Orient because of the numerous lotteries fan tan houses and racing establishments in the colony.
Principal Exports
Cement, bamboo, hogs, bricks, native paper, firecrackers and tinned fruits and vegetables.
Principal Imports
Cotton piece goods, rice, kerosene, sugar, flour and iron and steel manufactured articles.
Industries
A Hong Kong company maintains a large cementmanufacturing plant here. Small firecracker establishments are numerous and there is a considerable number of primitive plants for the canning of fruits fish and vegetables. Fishing is a common pursuit of the native population who make Lappa the Chinese maritime customs port for Macao their headquarters.
How Reached
Steamers leave Hong Kong for Macao twice daily the trip occupying 3 to 4 hours and daily steamers operate to Canton a 7 hours journey from Macao.
Hotel
The Hotel Riviera
Communications
There is a city telephone system the Great Northern Telegraph Co operates a cable service and the Macao Government maintains direct communication with Lisbon by radio.
A steamship service subsidized by the Government is maintained between the Portuguese colony of Macao and the Portuguese colony of Timor in the South Seas.
Bank
The principal bank of the colony is the Banco Nacionale Ultramarino.
Currency
The official currency of the colony is the Macao dollar which is traditionally on a par with the Hong Kong dollar. In practice the Hong Kong dollar circulates freely in the colony of Macao and is generally used by visitors.
American Consul
Macao is in the Canton consular district.
Note
The Portuguese colony of Macao consists of the peninsula of Macao and the islands of Taipa and Colowan. The area of the whole is 44 square miles. It was only in 1887 after establishment of the Chinese maritime customs service under Sir Robert Hart that the Chinese Government recognized Macao as a Portuguese possession. The foreign trade is chiefly through Lappa. The Macao Peninsula is 3 miles long and its greatest breadth 2 000 yards. The city is built on the side of a hill. The Portuguese in 1557 received a permit from the Chinese Government then the Ming dynasty to work factories here President Washington in 1790 appointed Major Shaw a Canton resident as consul to Macao. During the eighteenth century Macao was the chief port of western trade with China.
Lappa
Situated on an island at the mouth of the Chu or Pearl River in Kwangtung Province 40 miles from Hong Kong, 670 miles from Manila, 88 miles from Canton, 948 miles from Shanghai, 6.089 miles from San Francisco. It is the customs port for the Portuguese settlement of Macao.
Principal Exports
Hogs, poultry, bamboo bricks and tiles, coconuts, eggs, palm leaf, fans, firewood mats, pottery and earthenware marble and granite, tea, softwood timber and paper.
Principal Imports
Cotton piece goods, beans and peas, rice, cement, fresh and salted fish, flour groundnuts, macaroni, matches, kerosene, sugar, iron and steel manufactured articles and candles.
Industries
Lappa has little industry except trade to and from Macao.
Trade Value
The value of direct foreign trade in 1930 was 16 450 490 haikwan taels 7 567 225 net foreign imports 12 676 363 haikwan taels 5 831 127 exports 3 774 127 haikwan taels 1 736 09 eached Lappa imer from Honge Chinese maritim.
How Reached
Lappa is a part of Macao and is reached through that port chiefly by steamer from Hong Kong.
Note
Lappa is the name borne by the Chinese maritime customs station for Macao. The population is chiefly fishermen and those engaged in trade transport.
in "Commercial Travelers' Guide to the Far East, United States".
Bureau of Foreign and Domestic Commerce, 1932
Publicada por João Botas à(s) 16:36